"WRESTLING WITH THE ANCIENTS: MODERN GREEK IDENTITY AND THE OLYMPICS" 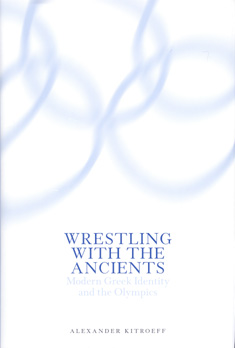 Associate Professor of History Alexander Kitroeff's book, Wrestling with the Ancients: Modern Greek Identity and the Olympics, has been praised by the many scholars and specialists who read it before publication, and Mark Dyreson, president-elect of the North American Society for Sport History, has said that it is“destined to become the standard history” of Greece's relationship to the modern Olympic movement.

Written with the adept, illuminating touch of a novelist, this unusually lucid analysis uses original archival sources and a deep understanding of modern Greek and European history to recount the ongoing saga of modern Greece's often impassioned engagement with the Olympic movement. According to Kitroeff, Greece's role in the international Olympic movement must be seen as a continual process by which the country has experienced, constructed, and confronted its dual identity: heir to antiquity's heritage and modern, European state. The Olympic Games' revival in 1896, and the subsequent emergence and development of the modern Olympic movement, added yet another area for constructing Greek identity, as well as a new and grand international arena in which Greece could vie for honors. In the end, Kitroeff argues in his book, Greece has managed to attain a privileged status in the Olympic movement by assuming its singular role of modern steward of ancient tradition.

Watch for a review of Wrestling with the Ancients in the Summer 2004 issue of the Haverford Alumni Magazine.