As the World of Television Turns 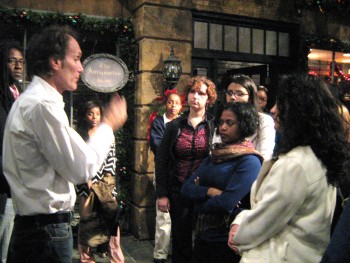 Chris Goutman '73, executive producer of As the World Turns, talks to a visiting group of bi-college students on the set of the show.

Published
Share
A group of bi-co students gets the inside scoop on the making of a daytime drama.

Over fall break, Chris Goutman '73, Executive Producer of As The World Turns, hosted 14 bi-college students for a day's look at the inner workings of a daily daytime soap opera series.  Associate Director of Major Gifts Lisa Piraino and Jill Sherman Fellow for Leadership in Advancement Terrence Williams accompanied the group.

In the Brooklyn building that houses the studios of As The World Turns, three students sit around a coffee table in director Chris Goutman's office poring over a script and a blueprint of the set.“What's Meg doing? What size shot is it?” asks Goutman. He's referring to a character on the show, and the size of the shot refers to how much of Meg will be shown. The students mull their choices, which can range from a full body shot to a zoom in to the actor's face.  These students are in the directing workshop, and after a half hour with Goutman they have learned what goes into making choices about the placement of actors on a set, what camera cuts and angles can be used, and how to speak director lingo.

Meanwhile, in a workshop in another room, acting coach Larkin Malloy coaches two students through a heated, emotional scene. Malloy's teaching is hands-on; he actively demonstrates the actions he wants to see the students play out, like how to tauntingly lean in for a kiss then pull away.“Really go for it,” calls out Malloy.“Have fun with it.”

One floor down from the acting workshop, six students sit around a small conference table with screenwriter Gordon Rayfield, discussing the nature of his craft. Gordon spends most of the two hours talking about the differences between daytime writing and primetime writing as well as the implications for character development in a show that has been around since the 1950s.  Says Rayfield,“The nature of soap operas is that people become invested and they know these characters better than you do.”

After lunch, Goutman takes the group to watch a dry run–a quick rehearsal of a scene with only actors and no props, scenery, or tech.  The group sits along the perimeter of the room trying to be inconspicuous. But when Roger Howarth, who plays Paul Ryan on the show, walks in, he does a double take. He didn't expect this audience and he looks at Goutman, sitting nonchalantly by the door. “We just really want to humiliate you,” jokes the producer.

Marie Wilson, who plays Meg Snyder, follows Howarth into the room. Wilson looks similarly surprised and embarrassed to find an audience and she hides her face behind her script. But the actors quickly recover and run through their scene. In it, Paul has been hospitalized after suffering a gunshot wound. He wants to leave the hospital, but Meg tries to make him stay and recuperate.

Next, the group troops down a few flights of stairs to the set, which is arranged to look like a police station. Here, actress Colleen Pinter, who plays Barbara Ryan, and Grayson McCouch, who plays Dusty Donovan, are rehearsing for a confrontation scene.

“Barbara, take a few steps back. Dusty come forward a little,” orders the director, who gives his instructions from the control room where microphones feed into speakers on the set. These seemingly minor details dominate the entire half hour it takes to film a three-minute scene.

Asked what inspired him to set up the elaborate day-long experience for students, Goutman says,“Part of what we do here with all of the young cast members is education. We teach them how to be actors and how to be part of the business. That's something I have always enjoyed.”

Goutman, who came back to campus in 2007 to join in a“Haverford in Hollywood,” panel discussion that featured alums in the entertainment industry, says he also had another motivation: to dispel the notion that soap operas are the poor step-child of that industry.

“So much goes into these shows and I wanted to give students a thorough understanding of what it is we do,” says Goutman.“As a liberal arts major, when you first get into the television business, it is really flabbergasting how many disciplines and cross-disciplines it uses. So many students go for degrees in communications, but I think they are selling themselves short. I think liberal arts is a great background for television.”

Thanks to the New York trip, John Carriero '09 now sees daytime drama in a whole new light.“Despite what one might think about soap operas, watching one being made from the initial ideas to the actually filming was very impressive,” says Carriero, who expressed hope that Haverford would continue to offer programs like this.

Rebecca Bass '12 was also impressed.“There are so many major pieces that go into a television production that you don't usually think about, from the extensive editing process, to music, to wardrobe, to set design,” Bass says“They all play so much into your subconscious reaction to the show and the characters, and it was great to see how they fit together in the process.”