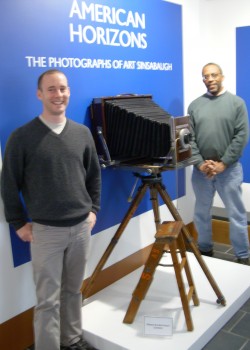 When William Williams first saw the exhibition American Horizons: The Photographs of Art Sinsabaugh four years ago at the Art Institute of Chicago, he was determined to bring the show, then on a national tour, to Haverford.

Williams, the Audrey A. and John L. Dusseau Professor in Humanities and a noted photographer himself, appreciated the broad scope of the exhibition, which is the first major survey of the late artist's nearly 30-year career. And he found Sinsabaugh's black and white images of urban and rural landscapes evocative for the way they combined a 19th-century technique (Sinsabaugh used a giant 12 x 20-inch“banquet” camera) with a 20th-century aesthetic vision.

Williams got his wish. The American Horizons show, which opened on October 3, is on view in the Cantor Fitzgerald Gallery through December 14. But he got even more. In the midst of the long term planning for that show, which was organized by the Indiana University Art Museum, Williams found himself embarking on an even more ambitious project. The aim: to raise Haverford's exhibition capabilities to museum levels.

Responding to a proposal drafted by Williams, the college has invested in a number of permanent security and environmental upgrades in the gallery over the last year.  In fact, the Cantor Fitzgerald Gallery space now ranks as one of only a relatively few college art galleries in the region that has kept pace with the ever more stringent standards for exhibiting fine art set by the American Association of Museums. Indeed, Haverford's is the only college art gallery in the country to host the American Horizons exhibition, whose previous stops have included Kansas City's Nelson-Atkins Museum, the Monterey Museum of Art and the Columbus Museum of Art.

“The Sinsabaugh show was just one part of this,” says Williams.“These were things we needed to do in order to be able to bring bigger and better shows to Haverford.  It's all part of enhancing the resources devoted to visual arts on campus.”

Upgrades installed in the gallery include all new smoke and heat alarms, new temperature and humidity controls and two high-end hydro-thermographs, which constantly chart the temperature and relative humidity in the room. Also installed was a dry pipe pre-action sprinkler system. These state-of-the-art systems are particularly crucial for galleries, says Campus Exhibitions Coordinator Matthew Seamus Callinan.“The pipe is dry and before it acts it dispenses some air which triggers an alarm to security,” he explains.“They can shut it down if it is not needed, thus saving the artworks from water damage.”

After a consultation with the lighting designer for the Philadelphia Museum of Art, more than 60 new light fixtures have been installed and new light meters now record the precise“foot candles” the gallery's lighting casts on the works.

Light levels are especially important with photography, says Callinan, who coordinated the installation of the Sinsabaugh show and supervised the gallery renovations. “But light can really damage all kinds of art objects,” Callinan says.

Also dramatically upgraded have been the gallery's security measures.“Previously, security was whoever was sitting at the [gallery reception] desk,” says Callinan. Now, there are motion detectors and four high-definition security cameras which have a feed to the monitoring station in the safety and security office.

The system proved its worth one weekend last spring, during an exhibition of landscape paintings by Norman Turner, when a security guard surveying the camera feed noted a strange mist near the ceiling in the gallery. The guard called Callinan on his cell phone and Callinan got in touch with Bob Harper, manager of central plant HVAC services. Harper soon determined the problem was a malfunction in the steam heat system and was able to quickly shut it down and ensure the safety of the works.

According to Williams, the upgrades not only put the gallery in a position to host high-caliber traveling exhibitions, such as the Sinsabaugh show, they also give museums and collectors the confidence to lend valuable works to exhibitions curated on campus.

“We've seen that already with the alumni photography show,” says Williams about A Century of Haverford Alumni Photographers, which ran through September 21 and featured some rare and priceless photographs that came to the show on loan.  Williams already has some big plans for the future:“We will be borrowing again from collectors and museums for a Walker Evans show next year and after that for a Man Ray show.”

“It's all for the students,” says Williams about the push to build a better gallery space.“As we upgrade our exhibitions program, students get the chance to learn about visual culture, to get curatorial and exhibitions experience that can lead to great internships and maybe to careers in the arts.”