The Truth About Hitler's Skull 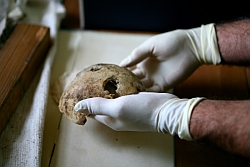 A scientist on the History Channel series "Mystery Quest" examines a bone fragment in the Russian State Archive purported to come from Hitler's skull.

Published
Share
When cinematographer Jonathan Miller '01 shot an episode of the new History Channel series“Mystery Quest” he didn't expect it to become an international incident and fodder for a Letterman monologue. But that's just what happened.

Cinematographer Jonathan Miller  '01 was in Berlin with a production crew in April shooting an episode of the series“Mystery Quest” about the doubt and speculation that has swirled around accounts of Hitler's suicide during the Russian bombardment of 1945. On their list of tantalizing clues to examine for the show were skull and jawbone fragments, purportedly from Hitler's skull, that were housed in Moscow's State Archive. It wasn't clear, though, if they would be allowed in to see the bones. But the team got lucky. "At the last minute, one of our historian contacts in Russia said he could get access to the skull," says Miller.

After a last minute scramble for visas, the team traveled to Moscow with University of Connecticut archaeologist and bone expert Nick Bellantoni, who performed a DNA test on the skull. The results of the investigation aired in an episode titled Hitler's Escape on September  16  with a dramatic“reveal” at the show's end.  According to Bellantoni and a team of fellow forensic experts, the skull belonged not to Hitler, but to a woman between 20 and 40 years old.

It's been big news ever since.  A miffed Russian government  is disputing that the“Mystery Quest” crew ever even visited the facility, while the History Channel has rebutted with evidence of contracts and receipts for a location fee. David Letterman worked a few jokes about the controversy into a recent late-night monologue.

“I wasn't even sure the DNA test would work,” says Miller, who shot footage for the show of Bellantoni handling the skull fragment.  (The scientist also got to examine the blood-stained couch on which Hitler supposedly shot himself after swallowing a cyanide pill.)“The condition of the skull was terrible and it could have been contaminated. That they actually got something was pretty amazing.”

Miller, who has also shot a“Mystery Quest” show on the Amityville horror and another about the organization Odessa which smuggled Nazis out of Germany after the war, says the revelations about the skull and the furor that has ensued have been a major surprise.  Says Miller,“It's been a pretty crazy adventure.”