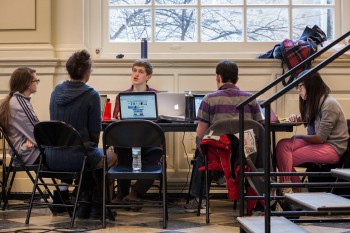 One of the teams competing in the first Tri-Co Hackathon in Founders Hall. Photo by Thom Carroll.

Published
Share
During a weekend marathon in Founders Hall, Haverford, Bryn Mawr and Swarthmore students had 48 hours to develop and present their innovative ideas for technology. A language-learning app took top prize in the contest.

Students from Haverford, Bryn Mawr, and Swarthmore colleges had just 48 hours to conceive, develop, and present their web and mobile technology ideas at the first Tri-Co Hack-a-Thon Jan. 24 to 26.  Fourteen teams delivered, working on their ideas straight through the weekend before giving a two-minute presentation of their entries to five judges in a“Shark Tank”-style competition on Sunday night.

Many of the projects focused on the needs of the Tri-Co community in the areas of food, dating, course schedules, and shuttle bus times.  A total of 63 students, primarily computer science majors, participated in the Hack-a-Thon and many more students and faculty filled Founders Great Hall at Haverford for the presentation and judging.  Participants took breaks for food and sleep as needed.

The winning entry, called“TryLinGO,” is a language-learning app that uses a geolocation program to identify where the user is and instantly present translations of nearby objects on a mobile device such as a smartphone.  For example, TryLinGO might provide someone walking around Haverford's campus with translations for“car,”“tree,” and“pond” as the user encounters those things.

The judges awarded second place to“WatchOut,” a safety app for smartwatches that sends texts for help with the smartwatch wearer's location to designated contacts. Team members Maclyn Brandwein, Brionna Verse, Richard Ngo, and Kendell Byrd, all from Swarthmore's class of 2017, received $200. An idea for an app called“IOU,” took third place. Designed by Swarthmore seniors Mallory Pitser, Melissa O'Connor, and Madison Garcia, IOU helps users who owe money or who are owed money keep track of the debts and reminders to pay up. Each member of the team received a $25 Apple gift card.

Haverford grad Andrew Thompson '12, a“community evangelist” at Azavea Inc. in Philadelphia, served as master of ceremonies for the presentations. The event was organized by students, staff, and faculty from the Department of Computer Science, the Libraries, the Hurford Center for the Arts and Humanities, the Instructional Technology Center, and Tri-Co Digital Humanities.

The Hack-a-Thon was the brain child of Dershowitz and Sorelle Friedler, a visiting assistant professor of computer science at Haverford.  Dershowitz said the event is intended to encourage new talent in the Philadelphia region's technology scene.