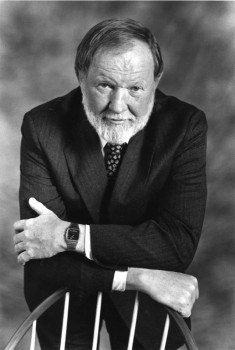 Published
Share
Tom Kessinger, a beloved figure on campus during his tenure as Haverford College president from 1988 to 1996, has died at age 73.

Tom Kessinger, a beloved figure on campus during his tenure as Haverford College president from 1988 to 1996, has died at age 73. He passed away on July 4, two weeks after suffering a head injury in a fall while playing tennis.

A northern New Jersey native, Kessinger first came to Haverford as an undergraduate with the Class of 1963. At age 20, he interrupted his studies to join the Peace Corps, traveling to Punjab State in northern India, where he worked at a training center for community development workers. Part of his Peace Corps service involved bicycling to 15 different villages to work with trainees developing rural youth clubs. Kessinger met his wife, Varyam, in India, and returned to the U.S. with her to complete his Haverford degree in 1965, through a cooperative agreement with the University of Pennsylvania's South Asian Regional Studies Program.

“Tom came back invigorated in every way from his Peace Corps experience,” says Professor Emeritus of History Roger Lane, who taught Kessinger as an undergraduate and later became a good friend.“In India, he found what he wanted to do in life.”

Kessinger, who was fluent in Urdu, Hindi, and Punjabi, went on to receive his Ph.D. from the University of Chicago, and taught South Asian History, first at the University of Virginia, and then at the University of Pennsylvania. In 1977, he took a position with the Ford Foundation, where he would work for 11 years. From 1979 to 1987, he was based in Jakarta, Indonesia, as the Foundation's Representative for Southeast Asia.

Kessinger left the Ford Foundation to become Haverford's 11th President in 1988. During his years at the College, Kessingerâ€” who students fondly referred to as“Tommy K”â€”became known as a thoughtful leader, who worked to gain support for long-overdue upgrades to the campus, including renovations of Founders Hall and a number of other academic buildings. Kessinger was closely involved in the construction of the Whitehead Campus Center, and he guided a $75 million comprehensive fundraising campaign, which was the largest in College history.

Kessinger, who taught a popular course called“Politics and Culture of India” during much of his Haverford tenure, helped extend Tri-College cooperation with Bryn Mawr and Swarthmore, worked to diversify the student body, and supported efforts to“internationalize” the College by seeking grant funding for new initiatives in the social sciences, including an African Studies Consortium. The Peace and Conflict Studies program (now called Peace, Justice, and Human Rights) also expanded considerably in the Kessinger era. He also supported athletics at Haverford by playing a leadership role in the then-fledgling Centennial Conference and by being a regular, cheerleading presenceâ€”if only for a few moments in between meetingsâ€”at countless home games.

Kessinger, who was a Quaker, was also known for helping to strengthen the connection to Haverford's Quaker heritage, and for his sense of humor and his kindness. As president, he“truly embodied the Quaker spirit of the institutionâ€” the warmth, integrity, commitment to social justice, openness, and fun, and to individual growth,” says Alexandra Perina '98.“I will remember him with such fondness as part of my wonderful Haverford years.”

Kessinger left the Haverford presidency in 1996 to take a post as the general manager of the Aga Khan Trust for Culture in Geneva, Switzerland, and held several positions with the Foundation until his retirement last year. He and his wife recently settled in Annapolis, Md.

“Tom Kessinger proved to be a excellent steward of Haverford's resources during his tenure,” says G. Richard Wynn, who was the College's finance chief during Kessinger's tenure.“But his longer-lasting legacy was his determination that the College combine academic excellence with an emphasis on values education in a community setting. His lifetime of service, much of it internationally, was a living testament to his beliefs.”

Kessinger is survived by his wife, Varyam, and his two sons, Colin and William.

You may view comments and share your recollections of Kessinger on an online guestbook.