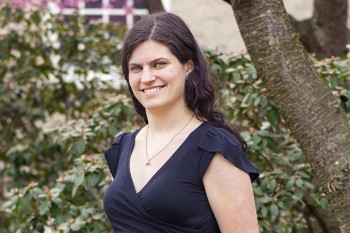 The linguistics major is working with Assistant Professor Brook Lillehaugen to create an archive of the written Colonial Valley Zapotec language, which is now extinct but is also related to over 50 dialects still spoken today.

UNESCO has classified almost 2,000 of the planet's over 6,000 different languages as endangered to some degree, but May Plumb '16 is part of a team working to save one family of them. This summer, with funding from the John B. Hurford Center for the Arts and Humanities, she is working with Assistant Professor Brook Lillehaugen to preserve and educate people about Colonial Valley Zapotec, a native language of Mexico's Southern region.

This particular dialect is now extinct, but was prevalent between 1521 and 1821 and is related to over 50 dialects of Zapotec that are currently spoken in Southern Mexico. It is notable because it was used to write the few Zapotec documents that survive from that period. "The Zapotec culture has one of the longest histories of writing in Mesoamerica," says Plumb, "and after the Spanish came to Mexico the Zapotec people began almost immediately to write with the Roman orthography."

Spanish colonists and, later, the Mexican government worked to eradicate Zapotec as a spoken and written language. "Zapotec people are told that their language is only a 'dialect,' that it has no grammar, and that it cannot be written," says Plumb. "[The Colonial documents] prove something that Zapotec people and linguists already know: that Zapotec is a real language, that it can be written, and that it is appropriate in political contexts."

The difficulty is that few outside of academia have access to these texts, and for those that do and speak Zapotec, reading them is difficult. As Plumb notes, it is the equivalent of a modern English speaker reading The Canterbury Tales.

To combat this loss of the Zapotec written language, Plumb has assisted Lillehaugen in the creation of the Ticha project. The goal of this project, which is Plumb's focus for the summer, is to electronically preserve the existing texts using existing tools such as the Fieldworks Language Explorer and the Textual Encoding Initiative.

Plumb is transcribing, translating, and tagging the documents she obtained copies of last summer when she visited Southern Mexico with Lillehaugen. Next semester, the linguistics major  will begin writing her thesis on Colonial Valley Zapotec, but that will hopefully be only the beginning of a deeper study of the language. "I would like to continue studying the Zapotec languages," says Plumb. "I've fallen in love with the language and culture, and with these documents, in the past few years, and I've made too many friends in Oaxaca to not go back."