Summer Centered: Ellysia Overton '19 Proves That There’s More to the Shore Than Just Sun and Surf

Ellysia Overton '19 is hard at work with a pipettor in the Woods Hole Oceanographic Institution lab of biologist Dr. Mark Hahn. 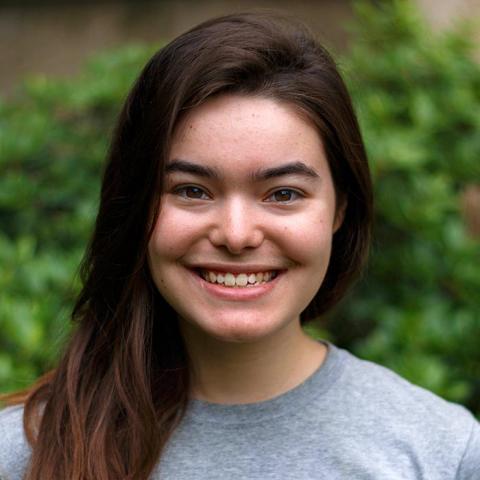 This summer, the biology major will be interning at the Woods Hole Oceanographic Institution, just as her campus mentor did before her.

Biology major and environmental studies minor Ellysia Overton ‘19 is heading to the beach this summer—even though she’s spending it in a lab.  In June, she’ll leave landlocked Pennsylvania behind for coastal Massachusetts, where she will be working alongside Mark Hahn at the Woods Hole Oceanographic Institution.

Overton has worked in the lab of her advisor, Assistant Professor of Biology Kristen Whalen, for the past two years, and was initially planning to do so this summer as well. But she changed her mind after hearing that Hahn, Whalen’s former Ph.D. advisor,  had won a grant to do natural product research and was looking for an undergraduate to assist him.

"I did not find out he got the grant until a few days before the applications for the Koshland Integrated Natural Sciences Center’s Summer Scholars program closed,” Overton says, “so I had to quickly rework my application for the off-campus internship as opposed to the on-campus one. After applying I found out that I had been awarded a Velay Fellowship,” which provides undergraduate women in STEM fields with the funds they need to conduct summer research.

Although the scenery around her will change, the nature of Overton’s research won’t. In Whalen’s lab, Overton examines marine products for any potential antibiotic activity, but this summer she’ll be working with halogenated marine natural products instead—compounds that, as Overton explains, “are similar in structure to man-made halogenated compounds, which are extremely dangerous to humans.” While she’s still working with natural products, in short, she’ll be studying their potentially harmful effects rather than their potentially beneficial ones.

"There is virtually no information on [HMNPs] yet,” she says, “and I am interested to see if these naturally-occurring compounds are as toxic as man-made ones.”

This work could potentially have major implications for the way seafood is produced and marketed. Because HMNPs have been shown to bioaccumulate and biomagnify in commercial fish and crab, Overton explains, this issue should be of particular concern to the population as a whole, and especially to demographics—like young children and pregnant women—whose immune response is often weaker.

As an aspiring biopharmacologist, Overton is particularly looking forward to this aspect of her internship. “I hope to be able to learn more lab skills,” she says. “As I plan on applying to graduate school in this field of research [this year],  this opportunity allows me to get a glimpse of what life as a graduate student would be like.”