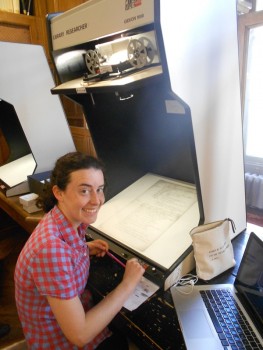 The recent graduate is in Paris creating a database Professor Lisa Jane Graham, who will use it to write a book on debauchery in 18th century France.

One Ford is buried in arrest warrants this summer, but they weren't issued by any modern police force. Charlotte Lellman '15 is in Paris, France, sifting through Lettres de cachet, a form of extrajudicial arrest warrant issued by Louis XV. While these letters were written up through the revolution, Lellman will be focusing on those from 1741.

With funding from the John B. Hurford '60 Center for the Arts and Humanities and the Louis Green Fund she  is creating a database from the letters for Frank A. Kafker Professor of History Lisa Jane Graham, who will use them to write a book on debauchery in 18th century France that considers a range of perspectives, including physiological, legal, and moral ones.

"As I read each suspect's file," says Lellman, "I record information about the suspect's age, name, place of birth, and so on, and I also transcribe any particularly pertinent quotations about the alleged crimes he or she has committed, notes on the person's character, interesting details, and anything related to debauchery."

The letters were issued for a variety of reasons, usually at the request of a family member. "Some of the cases are tedious reports about the grain trade or gambling," says Lellman, "but I love when I get a letter or a case that makes a whole vivid story and I can imagine the disingenuous letter writer promising never to behave inappropriately again, or a mother assuring the police that she did all should could to fulfill her duty to educate her wayward daughter."

Lellman, a French major, became interested in prostitution in pre-revolutionary Paris while taking a French literature class, "Libertinage et subversion," with Professor Le Menthéour at Bryn Mawr College and a course on the French Revolution with Graham.

Last summer, she also worked for Graham, conducting research using materials available at Haverford before writing her senior thesis on 18th century Parisian prostitution. During winter break her senior year, she was also in Paris working with original sources. "This was the first time I worked with manuscripts," says Lellman, "and I am really happy to be able to spend the summer continuing with similar work. The classes I have taken, the work I have done for Professor Graham, and my thesis all tied together really nicely."