A Student-Faculty Research Collaboration Takes Off 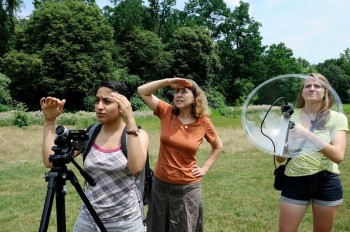 Published
Share
Suzanne Amador Kane (Haverford Physics) and her student research team used bird-mounted cameras to examine how falcons pursue their prey. Since their research was published in The Journal of Experimental Biology, the study has been attracting international media attention and a YouTube video of footage from a "falconcam" has gone viral.

In 2009, Suzanne Amador Kane began studying collective animal behavior and predator-prey interactions with Haverford students working in the summer and during the academic year. Kane, an associate professor of physics who specializes in biological physics, was interested in mobbingâ€”a phenomenon in which small birds team up to harass or even attack a much larger predator, such as a hawk. However, she realized that in order to understand the rules governing this behavior, her group first would need to investigate how raptors, such as falcons and hawks, pursue their prey.

That investigation led to an unusual collaboration with falconers around the world who agreed to mount tiny video cameras on their birds, and to countless hours spent analyzing the dizzying, dramatic footage from those cameras. Now, the results of that study have been published in a research paper co-authored by Kane and recent Haverford graduate Marjon Zamani '13, which appears in the current issue of The Journal of Experimental Biology.

Their paper, titled â€œFalcons pursue prey using visual motion cues: new perspectives from animal-born cameras,” was designated the journal's January 2014 Editors' Choice article, and was featured in Inside JEB (the journal's public news branch), and it has already been attracting wide media attention.

Kane has been interviewed by dozens of journalists and a video made from footage from one of the "falconcams" has had more than 2 million views on YouTube.

“I was taken aback by all of this interest,” says Kane,“But falcons are magnificent, charismatic animals and the falcon's-eye videos of their hunts are very exciting. I can still say that, even though I have spent hours studying them frame by frame using image analysis software. This is truly nature red in tooth and claw. There is something really primal and moving about watching that elemental struggle between predator and prey.”

Going into the project, Kane and her team discovered that the literature on falcons did not establish how the birds pursue their prey. But how could the team get an up-close look at falcons in pursuit in the air? The question baffled Kaneâ€”until she and her students watched the PBS documentary Raptor Force and got the idea to film these encounters using miniature bird-mounted spy cameras.

Finding the falconers she needed to collaborate on the study wasn't easy, says Kane.“We used social media and networked with falconers, even going to a falconry convention to make connections. It took a few years to assemble the full team.”

She now has 13 falconers around the world helping with the research.“Five of them worked on this study and there is a larger group working on two related projects also involving our undergraduates,” she says. The videos analyzed for the just-published study provided the researchers with a birds-eye view of the falcons' high-speed, in-air pursuit of their prey and revealed information about the bird's hunting strategies that had been unavailable previously. The Marion E. Koshland Integrated Natural Sciences Center provided funding for this novel and risky venture through its Special Projects program to promote faculty-student collaborations in new directions, especially those involving off-campus research.

Working with Zamani, a physics major with a biophysics concentration, Kane tested three strategies proposed to describe how the falcons pursue prey. After painstakingly locating the prey's position on each video frame and comparing the data with computer simulations of each strategy, they concluded that only one model agreed with the videos. During pursuit, the falcons appear to head off their prey using a strategy called motion camouflage that intercepts the prey in the least amount of time while also masking the falcon's approach. Their research also showed how the falcon uses its complex visual field during pursuits, and suggests that some seemingly dangerous maneuvers prey use to escape can be interpreted as a way to prevent motion camouflage.

Prior to the publication of the study, Kane and Zamani presented their findings the 2014 Annual Meeting of the Society for Integrative and Comparative Biology in Austin, Texas. Zamani was also the lead student researcher on another study the pair is writing up now that looks at how raptors move their heads when they search for prey. She has also launched her post-Haverford scientific career as an NIH researcher working at the Wyss Institute for Biologically Inspired Engineering in Boston, Mass.

Zamani isn't the only Haverford student on Kane's team to gain the sort of research experience that is more typically reserved for graduate students at other colleges and universities. M. Elias Tousley and Emily Cunningham, both Class of 2011 physics majors, performed the mobbing study, and Tousley gave a talk on his mobbing research at the March 2010 meeting of the American Physical Society. Emma Oxford '13 helped develop the team's bird-mounted GPS and other sensors, while Andrew (â€œHarvey”) Fulton '14, Elliott Schwartz '14, and Lee Rosenthal '15 followed up this work with a study of how hawks hunt prey on the ground and how birds form flocks.

Reflecting on her work at Haverford, Kane says,“We are always working in competition with much bigger groups at research universities, but I'm always amazed at how much our students can get done in their summer research and senior theses. I'm also inspired by how passionately they devote themselves to their work. I had to order Marjon home from the lab at times! She was inclined to camp out to finish up a really challenging stretch of data analysis.”

To view a video of a falcon in pursuit made by falconers Eddy de Mol and Francois Lorrain, working in Belgium, go to YouTube

For more information on the raptor study: