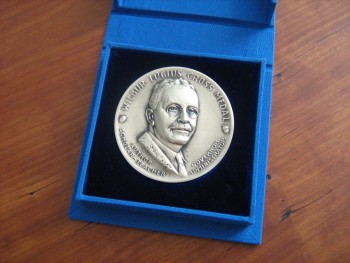 Published
Share
The medal is the highest honor given by Yale University's Graduate School of Arts and Sciences, of which Emerson is an alumnus.

Haverford President Stephen G. Emerson '74 has been awarded the highest honor bestowed by Yale University's Graduate School of Arts and Sciences: the Wilbur Lucius Cross Medal. Emerson, who received his M.D. and Ph.D. in cell biology/immunology from Yale in 1980, was presented with the medal in a ceremony on October 7.

Emerson was recognized for his understanding of the cellular mechanisms underlying graft-versus-host disease and the biology of bone marrow stem cells, leading to improved therapy for patients undergoing organ and bone marrow transplants. He was praised for his achievements as a physician, teacher, mentor, and administrator, as well as for his leadership and public service roles.

The Yale Graduate School Alumni Association established the Cross Medal in 1966 to honor alumni for outstanding achievement in areas of activity in which Wilbur Cross excelled. Cross, who received a Ph.D. in English from Yale in 1889, was a renowned scholar, author and literary critic, who headed the Graduate School from 1916-1930 and later served as governor of Connecticut for four terms.