In the 'Shark Tank' 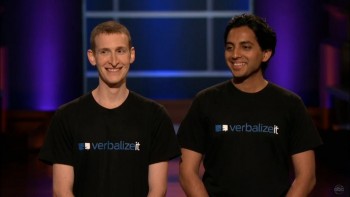 Ryan Frankel '06 and business partner Kunal Sarda swam with the sharks on May 17 in the season finale of ABC's Shark Tank television series. The episode's airing capped a highly productive year for Frankel and VerbalizeIt, his human-based translation company formerly known as PalmLing (see the Spring/ Summer 2012 issue of Haverford magazine).

Launched in February 2012, VerbalizeIt provides two-way live conversations with translators who can ask questions, recognize slang and interpret tone of voice. The company relies on crowd sourcing to recruit multilingual individuals around the world, who work whenever they are available VerbalizeIt's translator corps has grown from 1,300 to more than 7,500, providing translation in 10 languages.

Frankel and Sarda actually filmed their Shark Tank episode in Los Angeles in July 2012, not long after Frankel graduated from the Wharton School at the University of Pennsylvania with an M.B.A. In the end, 60 minutes of filming was whittled down to eight minutes of airtime, during which five“Sharks” grilled the VerbalizeIt partners about their business model.

But the reality of reality television is never quite what it seems. After weighing the terms of O'Leary's deal against other investment options, Frankel and Sarda declined his offer. Instead, VerbalizeIt banked on TechStars, a selective start-up accelerator program that also accepted Frankel and Sarda in 2012. At the end of the summerlong program, the two secured an initial round of $1.5 million in private equity financing and relocated the business to New York City.

Since filming, VerbalizeIt has partnered with Skype, Rosetta Stone and Inspiratoâ€”deals that represent a shift in focus over the past year. Originally intended to provide telephonebased translation services for international travelers, VerbalizeIt now also helps corporate customers“make sure language is never a barrier to business,” says Frankel. For example, the company can help create bilingual call centers, translate documents and subtitle videos.

Going on Shark Tank did pay off in other ways, however. After the show aired, VerbalizeIt was flooded with inquiries from new customers and potential translators, says Frankel.