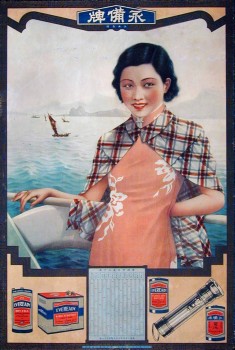 Published
Share
A new exhibit looks at the role of advertising posters in 20th-century Chinese culture.

Twenty-three advertising posters which played a crucial role during the political change and economic expansion of early 20th-century Shanghai will be displayed in an exhibit entitled â€œSelling Happiness in China,” running January 25-February 24, 2008, in Haverford College's Cantor Fitzgerald Gallery. An opening reception will be held Friday, January 25, from 5:30-7:30 p.m. in the Gallery. In the early part of the last century, as the consumer market in Shanghai grew, so did Chinese and foreign companies' use of the Western advertising medium of the poster. Some of the West's most famous corporate namesâ€”British-American Tobacco, Standard Oil of New York (Mobil), Colgate Palmolive, and Eveready Batteriesâ€”used posters to promote their products. These companies commissioned artists to paint pictures, usually of a beautiful woman or a scene from a popular legend or tale. The painting would then be reproduced by color lithography and become the central part of the poster, often framed by a colorful border. Early calendar posters from the 1910s echoed traditional New Year pictures (â€œnianhua”), depicting the idealized woman surrounded by her healthy children, and scenes from folk tales and classic stories. The most pervasive images of the 1920s and 30s were of glamorous women in modern dress and surroundings, reflecting the changing and increasingly independent role of urban women in Chinese society. The advertising posters depicted the modern ideal of prosperity and fortuneâ€”luxurious home furnishings, gardens, radios, telephones, and golf courses. Although the posters were mostly giveaways to distributors and retailers, they became so popular that Chinese consumers bought them to display decoratively in their homes. The art of the advertising poster declined with China's economy after 1938 and China's declaration of the War of Resistance against Japan and the Chinese Civil War. Today, these posters are rare and highly valued by art collectors. The“Selling Happiness” exhibit is made possible with the support of the Robert Brown Gallery in Washington, D.C. Located in Whitehead Campus Center, the Cantor Fitzgerald Gallery is open Monday-Friday 11 a.m.-5 p.m., Saturday and Sunday noon-5 p.m., and Wednesdays until 8 p.m. For more information, visit www.cantorfitzgeraldgallery.org or contact Matthew Seamus Callinan, Campus Exhibitions Coordinator, at (610) 896-1297 or mcallina [at] haverford.edu.