The Scoop on Seuss from a Haverford Graduate 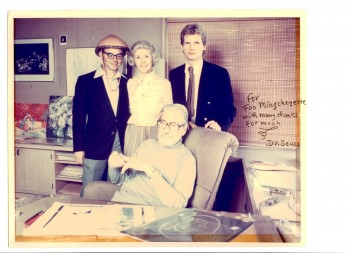 Left to right: Herb Cheyette '50 (in an Oriental hat from Theodor Geisel's hat closet) with Audrey and Ted Geisel and colleague Jed Mattes at the 1983 closing of a Coleco deal.

Something most people might not know about Theodor Geisel, the man more commonly known as Dr. Seuss: His nom de plum is actually his mother's maiden name, pronounced“zoice” in the original German.

One man well aware of this fact and other trivia about the prolific author is his long-time agent, Herb Cheyette '50, who negotiated his film and television deals.

Cheyette, a graduate of Yale Law School and alumnus of the Yale Drama School, met Geisel after stints at CBS and Capitol Records. These led him to the predecessor of the entertainment agency International Creative Management (ICM), which represented the author. Cheyette began working with CBS to develop television specials based on Geisel's books, and struck up a friendship with him that matured and deepened over the years.

“By sheer survival,” says Cheyette,“I became the only person at the agency who had a continuing relationship with Ted. I gradually accumulated responsibility for all deals on his behalf, and have represented him and his estate ever since.”

He remembers a courtly, gracious man, something of a recluse, who wore a bow tie in public and, he says, was“never so happy as when he was at his drawing board.” Geisel had a closet next to his studio filled with hats sent to him from children around the world, and when struggling with writer's block, he would read mystery novels, sometimes one a day, until he was ready to work again. He had also created a painting called“Plethora of Cats” featuring nothing but cat heads, and often relaxed by adding another head to the menagerie.

Cheyette also found his client, who refused on principle to accept book advances, to be notoriously particular when it came to the merchandising of his products.“Ted's attitude towards merchandising was, â€˜Why should I spend my time correcting other people's work when I can spend the same amount of time creating something new?' This was his primary reason for neglecting merchandising offers.” Although some offers did intrigue himâ€”such as a chance to work with Coleco on creating computer games for childrenâ€”most failed to pique his interest.

Cheyette likes to relate a story from decades ago when a major TV advertiser proffered a vast sum of money for the right to use a Dr. Seuss character in a holiday message.“I knew from experience that Ted would never permit one of his characters to be used for this purpose.” Cheyette suggested that instead, the advertiser use some long-forgotten verses of Geisel's; the sponsor agreed, and prepared detailed storyboards to present to the author.

“Ted had no recollection of writing the material, and agreed to look at the storyboards for this reason only,” says Cheyette.“Afterwards, he considered everything, but indicated that he didn't want Dr. Seuss to be connected to a particular religious holiday or a product of which large doses might have uncertain effects on children.”

The sponsor, says Cheyette, was“disbelieving and aghast” and reacted by substantially increasing the financial offer. When Geisel still balked, Cheyette stepped in:“I told him his verses consisted of less than 100 words, and if he accepted the deal he would go into the Guinness Book of Records as the writer paid the most money per word.” Geisel was silent for a moment, then responded,“I'd rather be in the book as the writer who refused to be paid the most money per word.”

Although animated versions of Geisel's books (such as the perennial classic How the Grinch Stole Christmas) have been successful, live-action films, like 2003's The Cat in the Hat, did not fare so well. Today, Geisel's estate, which Cheyette represents, will only permit animated movies to be made.“They're more easily controlled, not subject to the vagaries of actors, and we can make sure the script is adhered to,” he says. The estate, he says, was very happy with 2008's Horton Hears a Who!, and animated versions of The Lorax and Horton Hatches the Egg are being discussed.

Currently, Cheyette not only acts as agent for Geisel's estate, but sits on its board of directors, and remains a consultant for ICM. He lives with his wife in La Jolla, Calif., where he reads avidly, frequently sees his five West Coast grandchildren, and enjoys memories of his dearly missed friend, who died in 1991.

“Ted was fortunate to have a long life, and remain productive for its entirety,” he says.“He wrote Oh, the Places You'll Go! at 80 years old, and was working on scripts for a movie version the week before his death at age 87.” In fact, one of the last calls he took was from Cheyette, who wanted to set up a meeting with some animators.

“At first [his wife] Audrey said he was too sick to talk, but then I heard feet padding down the hall,” says Cheyette.“He said, â€˜I'm feeling fine today. If I make it through the week I'll call you and set up an appointment for next week.'” He didn't live to see that meeting.