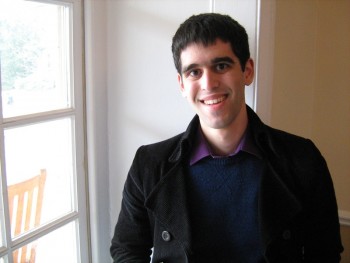 Published
Share
Rodriques is the third Haverford student to win the highly competitive Churchill Scholarship since the College was invited into the program in 2007. The scholarship funds graduate study in the sciences, engineering and math at Cambridge University.â€¨

During a junior year spent at Cambridge University in England, Samuel Rodriques '13 never found time for the kinds of travel experiences that are de rigueur for most American students studying abroad. Instead, Rodriques opted to pursue a one-year master's course at Fitzwilliam College in applied mathematics and theoretical physics. And though Rodriques was not eligible to receive a degree from the college, he opted to go the whole route and write a master's thesis as well.

â€œIt was a lot of work and I definitely did not get to travel that much, but I would not trade it for anything,” says Rodriques.“I really felt like I came into my own in that year.”

That kind of hard work and focus has paid off for Rodriques, who was named a Churchill Scholar in January. The highly competitive scholarships are awarded each year to just over a dozen U.S. students from 100 of the country's top colleges and universities by the Winston Churchill Foundation, which seeks individuals with the capacity to pursue original, creative work at an advanced level in the sciences, engineering and mathematics.

The scholarships pays for all of the fees associated with attending a one-year program of graduate study at Cambridge University and includes living and travel allowances as well. Rodriques's scholarship will amount to almost $50,000.

â€œSam is the third Haverfordian to win since the College was invited to participate in the scholarship program in 2007, and he is one of only two liberal arts college winners this year,” says Phil Bean, associate dean of the College and dean of academic affairs.“The Churchill is an exceptionally selective scholarship, and by all accounts it was much more competitive this year than it usually is, so Sam's selection for this honor is all the more impressive.”

When Rodriques heads to Cambridge University in the fall, he will follow in the paths of Byron Drury '08 and Martin Blood-Forsythe '10, Haverford's previous Churchill winners (who have continued their studies in phyisics at MIT and Harvard respectively). He plans to pursue an M. Phil. in computational biology, a field he describes as“new, but growing pretty rapidly.”

â€œOne of the major differences between science today and science 20 or 30 years ago is computation,” says Rodriques.“Significant amounts of computational power are readily available now basically wherever you go.”

Rodriques, who previously won a Goldwater Scholarship and a Beckman Scholarship, is particularly interested in how computational power can be used to advance knowledge in neuroscience.

â€œWe can study brain regions, like the frontal cortex and the visual cortex,” he says.“We can study individual neurons.” But what has only recently begun to be explored is the intermediate scaleâ€”the clusters of neuron that make up brain regions, such as the visual cortex.“To really understand how the brain works you have to understand how these clusters work and how they interact,” Rodriques says.“And to do that, you need to do computations and simulations.”

It is highly theoretical work, and that is what excites him so much.  â€œWhat I am interested in doing,” says Rodriques,“is establishing a connection between psychological phenomena and the behavior of neurons.”

Rodriques says he has found strong mentors at Haverford for his research interests, and cites in particular three physics professors, Walter Smith, Stephon Alexander and Peter Love.“They have been really instrumental in helping me through my entire time at Haverford,” he says.

â€œI met Sam when he was doing research in mathematical music theory with Professor Stephon Alexander after his freshman year,” says Love, who has worked with Rodriques for the last two years. Through Haverford's participation in the National Science Foundation Centers for Chemical Innovation, Love and Rodriques spent two summers at Harvard University doing research on quantum information. As a result, they were coauthors on a paper published in the Journal of Chemical Physics, and the two are currently working on a second paper.

â€œThe combination of his first rate intellectual prowess, with his organization, determination and maturity, makes Sam a formidable force as a research student,” observes Love.“It's one of the great pleasures of working at Haverford to work with students like Sam as they develop and fulfill their potential.”

As focused on science as he is, Rodriques, a native of Cambridge, Mass., has also found time for a few extra-curriculars during his undergraduate years. In 2010, he was the director of an ambitious and well-received Tri-College theater production of the Stephen Sondheim musical Assassins. At Cambridge last year he served as the technical director for an award-winning production of Jerry Springer: The Opera. And in his spare time, Rodriques is an avid player of the Chinese game Go, which he describes as far more rich in strategy than chess. The game, played on a 19-inch grid, originated more than 2,000 years ago and is popular across Asia.

Receiving the Churchill Scholarship is a wonderful recognition, but Rodriques says that the rigorous application process was also valuable in its own right. In particular, the essay (some have likened it to an“intellectual autobiography") that he was required to write made him take a hard look at himself and his ambitions.

â€œIt was a personal statement: This is the kind of science I want to do, and this is the reason I want to do it,” he says.“In writing that, you really figure out what you are doing. I have a much better concept of what I want to do in graduate school now than I had going into the process.”