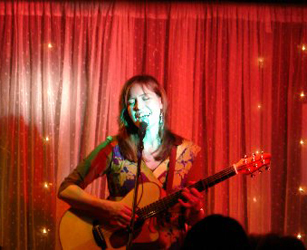 Published
Share
From magazine editor to folk musician living in Cornwall, England, find out about Sarah's journey -- including a performance on "The View". Our latest first-person account of life after graduation.

Editor's Note: This piece is part of our ongoing "Roads Taken & Not Taken" series. Haverford grads who want to share their own story of roads taken (or not taken) since graduation should drop us a line.

Virtually every important decision I've taken in my life has come about more or less by accident, and the decision to attend Haverford was no exception.

I'd already visited several colleges as a prospective student, feeling increasingly lost, invisible and uneasy. Not so at Haverford: there, people bent over backwards to make me feel welcome. One particularly friendly and enthusiastic group of freshmen practically frog-marched me into Paul Desjardins' Philosophy 101 class, and when I came out again an hour later, I was determined not only to go to Haverford but to major in philosophy.

Which I did, and it's a decision I've never regretted. What I do regret is that I didn't take my studies further. Dick Bernstein had even offered to help me expand my senior thesis into a book, and to this day I'm still kicking myself for letting such an incredible opportunity slip by; of all the stupid things I've done in my life, that's the one I'd most like to undo.

But I was young and foolish, as the song goes, and all I wanted was to get out of academia and into the“real world”. I'd met a woman at a party who told me that she was leaving her job at a music shop in Philadelphia. Her soon-to-be-former boss was there, too – did I want to meet him?

So it was that I spent the next seven years working in Vintage Instruments, an Aladdin's cave of a place that sold fine violins and other old and rare instrument: 18th century flutes, Martin and Gibson guitars, theremins and sousaphones, nyckelharpas and chittarones.

I'd spent my junior year abroad at the University of Strasbourg, struggling though French translations of Hegel and Wittgenstein while singing and playing guitar with an Irish band whose members I'd met at, you guessed it, a party.

The banjo player in that band became my first husband, and while the marriage eventually foundered, my love affair with folk and traditional music didn't. By the time Noel and I split up, we'd moved to Ireland. I took Irish citizenship and stayed there for thirteen years.

I spent eleven of those years working as a magazine editor, a job I fell into by accident and eventually left when I couldn't stand it any more. I decided to try playing music for a living – and to my utter astonishment, it's been more successful than I could ever have envisaged.

Last year, I moved with my husband Feargal (another Irishman!) and our two children to Cornwall, in the southwest of England. My mother had died three years previously, and my stepfather, unable to manage on his own, made us an offer we couldn't refuse whereby he would renovate an outbuilding into a cottage for himself and hand the main house over to us.

We're living in a beautiful place, just a few miles from Land's End, and now I'm very excited about a new project I'm working on with another singer/songwriter I've met locally. I still play a guitar I bought from Vintage Instruments while working there, the payments coming out of my wages each month. My experience as a journalist comes in handy for writing press releases and newsletters, and philosophy continues to dominate my thinking and my reading.

So in a way it all makes sense...but there was no master plan, and still isn't. I've no idea what the next ten or twenty years will bring. The one thing I'm certain of is that whatever it is, it's the last thing I could imagine at the moment.

Sarah McQuaid '87 lives with her husband and two children in Cornwall, in the southwest of England.