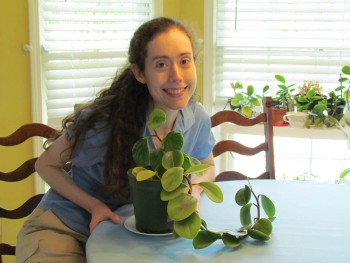 Published
Share
Kelley, now an English professor, traces the life of the plant she received as a freshman, 18 years ago.

Exactly 18 years ago I was preparing for my freshman year at Haverford. I was deciding carefully which R.E.M. and Toad the Wet Sprocket cassette tapes I had room to pack. I had borrowed my best friend's red shirt for something ominously called“the Dorm Olympics.” In August, I received letters on my 18th birthday from my new“Customs people,” who seemed very nice. I wasn't sure what a Customs person was, but I was from Oklahoma, and maybe they thought that was a foreign country.

When I got to campus, I loved the feel of the close-knit community, and I adored having a built-in group of friends in my Customs group. I survived the Dorm Olympics and Primal Scream, and in the Dining Center I told a funny guy with a beard that I liked his spiky purple hat. Nine years later I would marry him.

One of my favorite parts of Customs week was that we all received our own plants. Since we didn't have any pets in the Haverford College Apartments, this was about as good as it was going to get. I picked out a cute little one with shiny round leaves. It was a“peperomia”â€”a name my roommates and I thought sounded like“pepperoni,” but I promptly forgot this and had to be reminded years later; at the time, I only knew it looked strong and hardy enough to live in a college dorm. My roommates and I put our plants on the top of a bookshelf near the living room window, and the bottom shelves were stacked with textbooks and works of literature. At the end of the year, two of the plants were still alive, and I was proud of my little“freshman plant” for lasting through the yearâ€”one of the most exciting and intellectually engaging years of my life. Of course, my plant hadn't had to study for Chemistry finals the way I had.

When I was off campus, I left my plant with Carol Wagner and the other exceptionally kind arboretum staff. I imagined that staying there was like plant summer camp, except that every time I picked it up, my plant looked better than when I had dropped it off. When I graduated, I took my freshman plant with me to the University of Iowa, where I pursued a master's degree and a Ph.D. in English. It was like having a little piece of Haverford that I could carry around with me. The plant survived four moves in Iowa City, then accompanied me to Northwestern for a postdoctoral fellowship. My plant came with us to Alabama when my husband (Andy Clinton '98) and I found teaching jobs in Montgomeryâ€”I at Auburn University Montgomery and he at St. James School. That's one resilient plant.

This summer my freshman plant turned 18. That's how old I was when I got her. Then I was a student; now I'm a college professor teaching classes on some of the same literature I studied at Haverford. Then I was an inquisitive young woman ready to go where life took me; now I'm married, with a house of our own and our first child on the way. What baffles me is that my plant looks just the same, only bigger, and she's still in her old plastic pot, where“HCA” is still legibly written in magic marker on a piece of brown tape. She's done well for herself over the years. She has five kidsâ€”that's what I call the pieces of her that have fallen off and have taken root in other potsâ€”that all look just like her. Now that she's 18, I suppose it's time to be packing her off to college. I think about all she could learn and what she could do with her life. Maybe she'll bring me along in a pot for company.

Joyce E. Kelley is an assistant professor of English at Auburn University at Montgomery

Care to Share Your Story of roads taken (or not taken) since graduation?  Drop us a line!  elotozo@haverford.edu