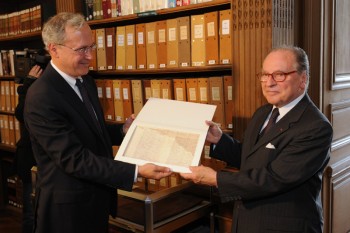 Published
Share
At a special ceremony and gala celebration in Paris on June 8, Haverford College and the Institut de France marked the return of a long-lost letter written by philosopher Rene Descartes, and the beginning of new scholarly connections.

Throughout his flight across the Atlantic, Haverford president Stephen G. Emerson '74 kept a sharp eye on the backpack he'd carried aboard the red eye from Philadelphia to Paris. Inside the pack, encased in a protective sleeve crafted from Mylar and mat board and enclosed in a specially made wooden box, was a letter written by French philosopher Rene Descartes in 1641.

Emerson's special mission:  to return the valuable letter to the Institut de France, from whose vaults it had been stolen more than 150 years ago by a notorious document thief.“That bag stayed at my feet the whole time,” said Emerson.“It never left my sight.”

Emerson handed over the letter on June 8 during a special ceremony in Paris that was attended by members of the French Academy, U.S. diplomats, and a contingent of Haverford faculty, staff, alumni and current students. The ceremony took place at the Institut de France's historic headquarters, which houses five learned societies (among them the famed Academie Francaise) and is connected to the Louvre museum by the Pont des Arts pedestrian bridge. The event was followed by a gala celebration at the Hotel de Talleyrand, the elegantly restored 18th century mansion that is part of the U.S. embassy compound.

This was just the latest step in a remarkable odyssey that began in January when Utrecht University researcher Erik-Jan Bos did a Google search and discovered a Descartes letter, long thought lost, on a list of items in Haverford's Special Collections. (The list catalogued a massive autograph collection put together by Haverford alumnus Charles Roberts, Class of 1864, and donated in 1902 by his widow.)

What the College did not know is that the Descartes letter had been stolen from the Institut, along with many other items, by a thief named Count Guglielmo Libri, who escaped to London, sold the materials and was sentenced in absentia in 1850.  (Also a surprise: The letter, written by the philosopher to his friend Marin Mersenne, is particularly significant for the new information it reveals about changes Descartes made to the manuscript of his Meditations on Metaphysics before publication.)

When Bos contacted Special Collections head John Anderies about the purloined letter and Anderies alerted Steve Emerson, the decision was quickly made  to return it to its rightful owners. “There really was only one possible course of action: Do the right thing and offer to return it,” said Emerson.“We certainly hope someone else would do the same for us if the shoe were on the other foot.”

In Paris, where Emerson was interviewed for a news report on French television, the handover of the letter received extensive media attention, with articles appearing around the world in a number of different languages, including Dutch, Polish, German, Swedish and Japanese. At the ceremony, grateful Institut officials awarded Haverford a $19,000 prize and the organization's Chancellor, Gabriel de Broglie, told the audience,“When our thoughts now turn to Descartes, we shall remember not just the values of Haverford College and the shared community spirit that binds us; nor just that we are joined because we all belong to the Republic of Letters, with deep roots, open city-gates and thriving citizens; but that we are also in your debt, happily celebrating one more chapter in the long history, well-bound and vibrant, of Franco-American Friendship.”

In his own remarks, which he delivered in French, Steve Emerson described as“poignant” the College's opportunity to return such a historic treasure. “First, the Meditations of Rene Descartes are perhaps the single most influential work of modern philosophy today, and certainly the most frequently studied monograph at Haverford College,” said Emerson, who double majored in philosophy and chemistry as an undergraduate. “Every student and scholar of epistemology, metaphysics, ethics and theology all hear the voice of Rene Descartes quietly thinking to himself in front of his firelight, realizing, â€˜I think, therefore I am.'  Second, our faculty always teach our students that the Republic of Letters is truly worldwide, and that there are no boundaries to scholarship and research â€¦ Finally, it reminds us that knowledge and community are truly dialectic, that everyone benefits when rights are honored, when knowledge is shared and when new friendships are forged.”

Other speakers at the event included Jean-Luc Marion, one of the world's foremost Descartes scholars,  member of the Academy Francaise and recent Haverford College honorary degree recipient; and Jean Mesnard, president of the Institut's Academy of Moral and Political Sciences.

At the reception that followed, guests heard remarks from Conrad Turner  '81, who as a junior history major translated the Descartes letter and wrote the original description of its historical context and philosophical significance.

Turner's undergraduate effort became part of the first round of international news stories about the Descartes discovery when Anderies found the document packaged with the letter and sent scans of them to Bos.  A”truly fine piece of work,” declared de Bos in several media interviews.“Had the author submitted it to a major international journal, it would have been published immediately.”

Turner, who now works for the U.S. State Department in Belgrade, reminisced about his Haverford  education (the Honor Code, spirited lectures by history professor Roger Lane) and recalled his personal encounter with the letter (â€œwhich over a few weeks forced a sleepless young man to think of the great philosopher and mathematician as a real human being”). Turner also talked about what the return of the letter symbolized.“It has to do with the obligation universities have to educate not only their students but society at large,” he said.“Real education inspires. For too many of the world's undergraduates the reality is different. Information is force-fed into the brain, causing a brief rearranging of a few neural networks before being swept off to make room for the next brutal infusion of facts. What remains is a grade on a transcript.  Inspiration, on the other hand, turns the brain into a magnet not just for facts but reason, purpose and values. That is what makes the difference between a good college and a great one.”

“It was an amazing, amazing experience,” said Steve Emerson of the trip to Paris. But Haverford's Descartes story doesn't end there.   Emerson said the College plans to use the prize money to help build on the ties now established at the Institut as well as with the Descartes scholars at Utrecht University. “We have developed so many new scholarly relationships thanks to the Descartes letter.  We see the potential for myriad international collaborations for our faculty and for our students.”