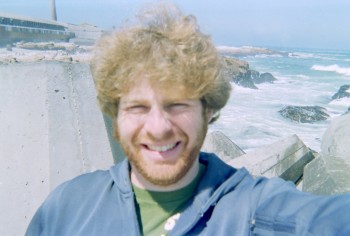 Published
Share
A paper Matt Klinman '08 worked on while studying at the University of Cape Town in South Africa was recently published in Meteorology and Atmospheric Physics.

Nearly two years ago, Matt Klinman '08 was spending the spring semester of his junior year at the University of Cape Town (UCT) in South Africa and pondering a topic for his culminating project. Rather arbitrarily, he says, he chose to focus on the behavior of Tropical Cyclone Favio, which hit Mozambique in February of 2007:“It was just based on a few lectures in my Ocean Circulation class. Unbeknownst to me, I was stepping into a discipline I knew basically nothing about.”

Now, that foray into the unknown has paid off in an exciting accomplishment for Klinman, whose paper on Favioâ€”co-written with his UCT professor Chris Reasonâ€”was published in the August 2008 issue of the journal Meteorology and Atmospheric Physics. Klinman was listed as the paper's first author, a rare honor for undergraduates.

“I was definitely really proud of it,” says Klinman.“To have done a project for school that ended up being meaningful enough to a bunch of strangersâ€¦that they put it in their publication is a very cool feeling.”

Klinman, who attended UCT as part of the“Globalization and the Natural Environment” program hosted by Swarthmore, Macalester and Pomona Colleges, chose to write about Tropical Cyclone Favio because it followed a path unlike any cyclone in recorded history.“Rather than going through Madagascar, as most powerful storms that make landfall in Mozambique do, Favio curved underneath the southern tip of Madagascar and snaked back up to the north,” he says.“My paper centered on explaining why the cyclone took this odd path.”

Klinman also updated a basic prediction model that links tropical cyclone landfall in Mozambique with El Nino/La Nina events, wind flow, and sea surface temperature trends.“Less than five percent of southern Indian Ocean tropical cyclones actually make landfall, but when they do, they are large-scale disasters,” he says.“To create accurate prediction models and better warning systems, it is very important to study the conditions under which landfall occurs.” A clearer understanding of these conditions could result in greatly reduced deaths and displacements caused by such devastating storms.

The experience of researching and writing the paper was, according to Klinman, intense.“I spent the first few weeks just hunched over a climatology textbook in the library trying to figure it out,” he says. As he began to get a better grasp of the material and narrow the scope of his project, he spent long nights in front of Excel spreadsheets and a free online climate plotting program provided by the National Oceanic and Atmospheric Administration.

A few months after he returned home, Klinman received an e-mail from Chris Reason asking him to contribute a little more to the paper and submit it to a journal. A year passed and Klinman heard nothing about the project; then, in June, Reason wrote to him:“Congratulations, our paper has been accepted!”

“I was pretty shocked,” says Klinman.

These days, the former geology and environmental studies major is living in Brooklyn, pursuing a completely different path: comedy writing and performance. Humor was in his blood even at Haverford, when he was a member of the bi-college improv troupe Lighted Fools and edited the“Last Word” page of the Bi-College News.“I am now taking improv classes at the Upright Citizens Brigade theater, writing a sketch show with fellow Haverford alum Jesse Lee '08, and I am a contributing writer for The Onion News Network,” says Klinman, who reports that if a career in comedy doesn't pan out, he'll most likely go to graduate school for geology and environmental science.