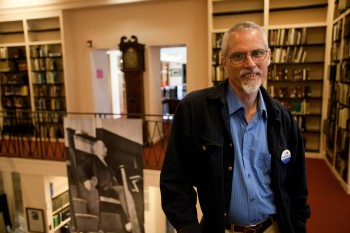 Walter Hjelt Sullivan '82 in the Quaker Collection in Magill Library with a banner picturing famous Quaker Rufus Jones behind him. Photo: Brad Larrison

On an early spring day, students rush in and out of the Dining Center with boxed burgers, pieces of fruit and the occasional soft-serve ice-cream cone. In the foyer, Walter Hjelt Sullivan '82 sips from a reusable water bottle. Today—and for the next six days—Haverford's director of Quaker Affairs will not eat lunch, or breakfast, or dinner.

Sullivan is at the start of a seven-day water-only fast to protest a controversial method of coal mining in Appalachia."Ask me why," urges a piece of paper taped to the table he sits behind. For the man charged with supporting campus religious and spiritual life, as well as deepening the College's Quaker connections, this is a tangible display of Quaker values.

"One of my convictions is that climate change is the Vietnam War of this generation," Sullivan says, speaking at his trademark reflective pace to anyone willing to listen."It's no longer about our grandchildren. It's actually about the children who are alive today, the children who we are teaching in this college. It's their lives that can be significantly disrupted by climate change."

Nine months since starting work at Haverford, the 53-year-old Sullivan has nurtured a passion for environmental issues, mentored young activists—and served as a role model for Quaker testimonies.

"Walter's challenge," observes Jesse Lytle, chief of staff in the Office of the President,"is to find ways to keep Quakerism alive and relevant in a way the broader community can connect to—to make it a living, breathing part of the community."

By all accounts, Sullivan is well on his way.

Founded by Quakers in 1833 but now nonsectarian, Haverford remains true to its formative spirit through the programs overseen by Quaker Affairs. The office has its roots in the presidency of Tom Kessinger '63/'65, who designated a special assistant to the President tasked with nurturing the Quaker ethos on campus. Helene Pollock, an active Quaker with a background as an urban pastor, served in that position for more than 15 years, starting in the early 1990s. By 2007, that nurturing effort had evolved into a full-fledged Office of Quaker Affairs, with Pollock as director. Emily Higgs '08, Sullivan's predecessor, carried on the work after Pollock's retirement, along with Kaye Edwards, associate professor of Independent College Programs, who served as faculty director of Quaker Affairs.

Today the office runs the Friend in Residence program, supports the student-run QuaC (Quaker Community) group, and leads spiritual retreats and trips devoted to exploring social-justice issues. The office also provides administrative support to the Corporation, a 200-member, largely Quaker, elected body that holds legal title to the assets of the College and supports the enrichment of the College's Quaker character. (James Krippner, a history professor, is the current faculty director of Quaker Affairs.) And Sullivan wears a second hat on campus, working with the Dean's Office to support students' varied religious and spiritual lives.

"He seems very wise," Adriana Cvitkovic '16 says of Sullivan, with whom she interacts regularly as co-head of QuaC."He thinks a lot before he speaks, and he's very intentional in his words.â€¦Anything he does, he does with this Quaker presence. I find that really cool."

Sullivan's activist streak goes back to his Haverford days as a student, when he fasted in protest of nuclear energy and the Three Mile Island accident.

Wiry, with a white goatee that matches his hair and the thin rat's tail he wears in back, Sullivan is clad on this day in a sweater, khakis, sensible shoes and a blue windbreaker with an "I ♥ Mountains" button.

He is fasting as a member of Earth Quaker Action Team (EQAT), an environmental organization based in Philadelphia that hopes to call attention to mountaintop-removal coal mining in Appalachia and the impact of fossil fuel use on the world's climate.

But this is not just a publicity stunt. He says it also serves the purpose of"purification and preparation" for larger protests, as fasting has done for many activists, including the Rev. Dr. Martin Luther King, Jr. His actions also speak to age-old Quaker values that resonate with the wider community, Sullivan says—values such as "growing the whole person, educating the heart and soul as well as the mind, inviting people to be active in the world" and working toward something that is larger than just their own self."

Through the Quaker Affairs Office, he created three weeks of thought-provoking programs tied to the recent visit of Friend in Residence Peterson Toscano, a performance artist and queer activist, and even snagged NPR coverage for the event. Sullivan also organized Religious & Spiritual Life Week, with its focus on welcoming students of all faiths, and staged a celebration of what would have been Rufus Jones' 150th birthday, with cake and ice cream, a special library exhibit, the screening of a documentary about the Haverford philosophy professor and American Friends Service Committee founder, as well as a talk by Paul Cates '50, who knew Jones personally. Sullivan also facilitated the Alternatives to Violence Project, which fosters conflict resolution; and led a field trip to Whitesville, W.Va., over fall break.

"It's was a transformative trip for everyone," says Samantha Shain '14, of Bordentown, N.J., who's majoring in growth and structures of cities. Since then, students have returned to West Virginia on their own to protest at the state Capitol.

"I see Walter as a mentor," says Shain, who is inspired by Sullivan's vision of"a sustainable, just and spiritually grounded future."

But Sullivan isn't all seriousness, despite the gravity of the issues he pursues. He has a whimsical side, evident in his fall

"Karma Shave" publicity campaign for Religious & Spiritual Life Week. Each day, he placed a series of yard signs around campus with"wisdom sayings" from various traditions, echoing the Burma Shave signs seen along U.S. highways in the 1920s through the 1960s.

"Over the course of the week, they grew like mushrooms," he says."People noticed."

The third of four children, Sullivan grew up around the world, including Malaysia and West Africa, as his diplomat father accepted new postings.

"It gave me the gift of knowledge that the world does not revolve around the United States, and there are other ways to see the world besides the dominant culture," he says of his upbringing. It also exposed him to a variety of religious practices.

Raised Episcopalian, Sullivan found Quakerism at Haverford, where he studied religion and was active in Quaker groups. One fellow student he met as a member of QuaC became his wife, Traci Hjelt Sullivan '84. "So Haverford gave me a good education, a faith and a life partner," he quips.

After graduation, he threw himself into community-based nonprofits in the D.C. area, working with refugees, urban youths and isolated senior citizens. A decade later, the Sullivans became co-directors at the Ben Lomond Quaker Center outside Santa Cruz, Calif., and raised their two daughters. Rebecca Sullivan, 24, is part of the first cohort of Quaker Voluntary Service in Atlanta. Her sister, Grace, 21, is a senior at Guilford College.

In 2006, his wife took a job in Philadelphia as conference coordinator of the Friends General Conference, an umbrella group for liberal and unprogrammed Quakers. Sullivan followed, working as director of education for Pendle Hill, a Quaker study center in Wallingford, Pa. The Sullivans belong to Green Street Friends Meeting in the Germantown section of Philadelphia, where they live.

A few years later, he joined EQAT as its program director and earned his chops as a climate-change activist."I was interested in the vibrant life of the spirit," he says."I found that it was about being deeply faithful and committed to strategic thinking and action." (He also taught classes and established a small practice in Breema Bodywork, a massage form done fully clothed on a mat on the floor.)

A longtime member of the Corporation, Sullivan jumped at the chance to work at Haverford. His background in programming for nonprofits was ideally suited to Quaker Affairs, he says."I also thought I would bring the gifts of pastoral care to the job," he adds.

Jonathan W. Evans '77, clerk of the Corporation and a member of the Board of Managers, says Sullivan"brings that combination of intellectual rigor and spiritual practice in a way that fits with our emphasis at Haverford on academics, student self-governance and the Honor Code."

His mission on campus, Sullivan says, is to fortify students—intellectually, spiritually and practically, with programs, a ready ear and funds—as they explore issues of faith. And he views exposure to activism as an essential component of that support.

"There are times when religious life can be the dead recitation of old ideas," he says."To me, a life that is alive and active is always questioning itself, always recreating itself and always connecting itself to the current condition of the world.

"For me, social activism work is informed by spiritual work," Sullivan says,"because it's really only when those two come together that we can be fully courageous."

This article appeared in the Spring/Summer 2013 issue of Haverford magazine.