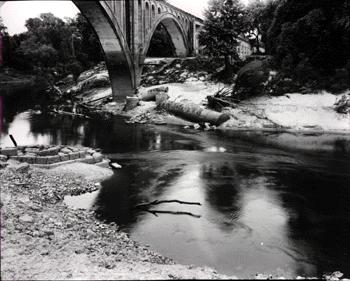 As part of his current project photographing forgotten Civil War battle sites featuring African-American soldiers, William Williams traveled to the banks of the Big Black River in Vicksburg, Miss. Beneath an existing railroad bridge, he discovered the bri

On the surface, new photographs by fine arts professor William Williams show lush landscapes featuring overgrown fields, sluggish streams and sleepy groves of trees. But if you look closer, unrecognized ghosts of Civil War history are hiding in the details.

This winter and spring Williams was awarded a $5,000 grant from the Pennsylvania Council on the Arts and a prestigious $50,000 Pew Charitable Trusts Fellowship in the Arts to support his continuing work photographing forgotten battlefields and campsites where African-American soldiers trained, fought and died. So far the project has taken him to neglected sites in Ohio, Virginia, Tennessee, Kentucky, Alabama, Maryland, Mississippi and Pennsylvania - most of which are distinguished only by the absence of ceremonial markers, flags or banners. In many cases, the only visual evidence left of an areas' historical significance are groves of trees that mark the existence of an old spring. Soldiers in the United States Colored Troops often camped or trained around such springs, Williams said.

"African involvement in the Civil War has been a story that's not part of the popular image of the period because of what happened near the end of the war and the Reconstruction," explained Williams. "There was the rising of the Ku Klux Klan and the national political sentiment sacrificed the blacks' rights. And that's a very sad story."

Williams said he believes the influence of the Ku Klux Klan in many regions may be one of the primary reasons why many of these sites remained unrecognized for decades, despite the existence of strong African-American communities. To find the sites, Williams has had to do a combination of research and detective work, often visiting small-town libraries and knocking on the doors of local natives, who may or may not know that their property embodies a vital piece of history.

Not all sites remained neglected. Camp William Penn in Cheltenham, Pa. recognizes its African-American soldiers not only with a modest marker, but its surrounding neighborhood is a true tribute to integration in the United States.

"It has since developed into a mixed-race, integrated neighborhood," Williams said.

Williams, who in the past, has focused his camera lens on subjects as diverse as cross-dressers and high society parties, hopes the photographs will serve as more than markers of history, but as celebrations and tributes to African-American soldiers.

"These photographs take a reflective look at the places where the passions and ideas of African-Americans in the Civil War arose," Williams said. "The pictures are documents, but they also work as evocative interpretations of these places as well."