From Philly to Mexico City: Looking at Immigration From Both Sides of the Border

Long before debates surrounding a Mexican border wall or a Muslim ban were top items on the nightly news, Haverford students were actively engaging with issues surrounding immigration. One such way was via an annual Center for Peace and Global Citizenship-sponsored Migration Field Study Trip over winter break. For the past eight years, a small group of students and staff trip leaders have flown to Mexico City or Arizona border towns as a way to better understand the socio-political, economic, and ethical dimensions of migration and to make personal connections with people whose lives are touched by migration.

For the first time, however, this year's trip began more than 2500 miles north of Mexico City in Center City office buildings and colorfully painted Kensington rowhomes that contain some of the organizations in Haverford's local community serving immigrant populations. So before any of the eight Fords showed a passport to a U.S. Customs agent, they were already immersed in the issues that immigrants in their own city face.

During their two-day Philadelphia tour, organized by Haverford House fellow and previous Migration Field Study participant Itzel Delgado-Gonzalez '16, the Haverford delegation learned about the work of HIAS PA, which has been providing legal, resettlement, citizenship, and supportive services to immigrants, refugees, and asylum seekers since 1882. They sat in a circle in a turquoise-and-purple-painted room of a North Philadelphia rowhouse to listen to Cathi Tillman discuss her work as executive director of La Puerta Abierta, a grassroots organization that works to improve access to quality mental healthcare for vulnerable communities, specifically those of Latino immigrants and refugees. They visited Puentes de Salud, a South Philly nonprofit co-founded by Steve Larson '83 to promote the health and wellness of the local Latino immigrant population through high-quality health care and innovative educational programs, and Friends of Farmworkers, which provides legal services, education, and advocacy for low-wage workers. They even took in the Paint the Revolution exhibit at the Philadelphia Museum of Art, celebrating Mexican modernist works from 1910­–1950.

"Getting to learn about these organizations made me realize all the wonderful things happening at a local level," said Vanessa Morales '19, a sociology major from Santa Ana, Calif. "While I was familiar with some of these organizations, it was amazing to have the chance to visit their offices and spend time with them. I am looking forward to learning more and becoming more involved in the small ways I can—from helping translate to organizing protests."

"I think it's easy to get caught up in addressing one need when it comes to managing a crisis, but in reality, there are always multiple, complex fronts to the issue," said Philadelphian Lev Greenstein '20, who had spent some of the past three years interning at HIAS PA. "For undocumented immigrants, it's not just legal [issues], but also physical and mental health [ones] that add up to a very vulnerable status of living. As such, I learned that many organizations work separately but [synergistically] in order to offer services to those in the most need. They create a net to support the immigrant community."

Delgado-Gonzalez agreed. "We'd be at one organization and they'd reference the great work being done at another organization we'd visit later on that day or the following day," she said. "It was really nice to tap into this stupendous network."

After two days exploring immigrant services close to campus, the group—which also included CPGC Interim International Coordinator Elias Mohr—landed in Mexico City, where they were hosted by Casa de los Amigos, a Quaker center for peace, understanding, and hospitality that often welcomes CPGC interns, postbaccalaureate fellows, and other Haverford students. While there, the group learned about the work the Casa does—which includes offering temporary lodging to refugees and migrants, supporting a migrant shelter known as Tochan, and teaching Spanish-language and other classes—and took in the sights, sounds, and smells of the city.

"Even waking up in Mexico City was unlike waking up in the United States in so many ways—I was more at peace waking up under five Mexican blankets to the warm sunlight hitting my face," said Morales. "I already miss the coffee and pan dulce—sweet bread—an awful lot."

Over the course of a week, the Ford delegation explored the city and visited local cultural sites of interest, such as the Museo Nacional de Antropologia and the Ballet Folklórico de México (where they took in a performance), in addition to their busy schedule of migration-related discussions and presentations with local nonprofits, aid workers, and students immersed in these issues every day. They spent one day at Tochan, the Casa-affiliated shelter that offers "medium-term" emergency housing and help with social services to Central American migrants. They also took time to get out of town to explore Teotihuacan, the archeological remains of the famous Mesoamerican city featuring the famous Pyramid of the Sun monument.

"The best part of the trip, for me, was visiting Tochan, where I was able to spend unstructured time one-on-one with migrants traveling from Guatemala, El Salvador, and Honduras through Mexico to the United States," said Rosemary Cohen '18, a history major from Washington, D.C., who was, in part, inspired to apply for the trip by Associate Professor Andrew Friedman's "Harvest of Empire" course.

For others, the trip had personal significance. Morales, a Haverford Chesick Scholar whose final project for that program explored the nexus of citizenship and higher education, embarked on the trip to better understand immigration policies in America, especially as it relates to people she loves.

"I am personally drawn to studying migration because I have family members who are undocumented back home in California," she said. "Being worried about them every day, about something that can happen while I'm away from home, is stressful."

But going to Mexico, the country her family emigrated from, also represented a homecoming of sorts. Morales got to reconnect not just broadly, with her Mexican heritage and roots, but specifically, by spending time with a grandmother and aunt whom she hadn't seen in 12 years.

"This, without a doubt, was the best part of the trip because it made me realize my role in a transnational family," she said. "We went to Caza Azul, home to Frida Kahlo and Diego Rivera. While we were there, we spent hours talking about what had been happening in my life, in their lives, because there is only so much you can say with the limited time you have on the calling cards. I learned more about my father with their stories of his childhood, stories he has never told me about. It’s amazing what we have to learn from our families that’s made difficult by concepts of borders."

All of the Haverford students agreed that they left Mexico City changed. Yes, they learned a lot about the facts, policies, and challenges of migration, but they also were deeply moved by the people they met and the stories they heard, and are now galvanized to action. Many returned home with a newfound desire to get involved at the local organizations they visited prior to the trip. Others have made new connections in their academic work or are inspired to think differently about their post-Haverford futures. (Morales, for one, now plans to return to Mexico after graduation to do more "radical hospitality" work with the Casa.) But all were moved to think deeply about the issues of immigration, citizenship, and borders, particularly as they relate to the new presidential administration.

"Everyone should take several minutes and contemplate how they benefit from immigrant labor," said Delgado-Gonzalez. "Because the truth is, we all do. Let's not just think about the tangible effects of a taller border wall. Let us also think about how emotionally and psychologically damaging U.S. immigration policies are to immigrants themselves, their families, their loved ones."

"[The U.S.] and many other countries are in a messy place in terms of perceiving refugees, safety, and immigration," said Greenstein. "But the fact of the matter is that searching for international shelter from persecution is a human right—inalienable—and looking for a better life because the present one is unliveable is an American ideal if there ever was one. As such, I now know more that I can use to fight for a better understanding of exactly what is happening to mobile people in the world today, and what the costs are to real human lives."

For a longer look at the Migration Field Study trip: 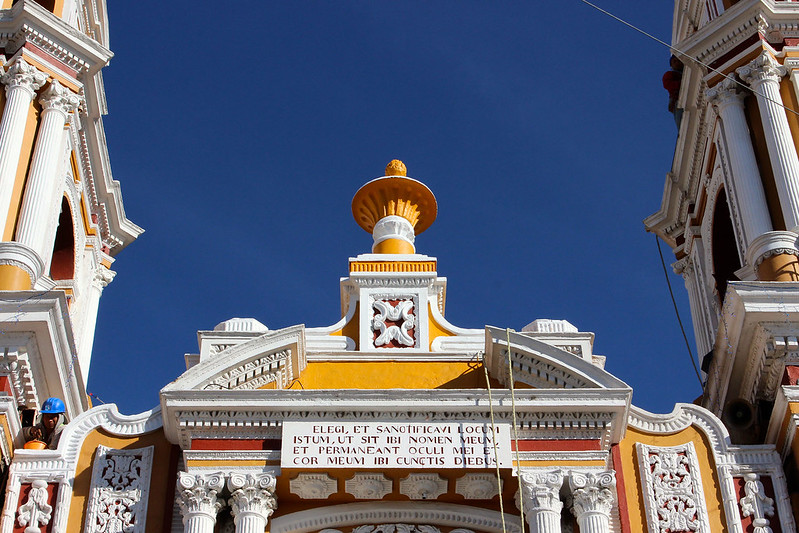