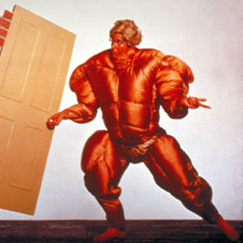 Artist Pat Oleszko as "Charles Patless" in one of her signature inflatable costumes.

Published
Share
A talk, a student workshop and a performance will be part of her four day residency.

New York performance artist Pat Oleszko comes to Haverford on November 13 for a residency sponsored by James House and the President's office. During her stay on campus, Oleszko, who creates multi-media installations and performance pieces, often using large inflatable props, will give a presentation and run a workshop for students. The workshop will culminate with a performance on Sunday, November 16th.  Visit  patoleszko.com for more information about the project.

A longer version of the following interview, conducted by Rose Howse, appeared in the Bi-College News (www.biconews.com)

Can you give us an overview of what you're aiming to accomplish when you visit Haverford?

The work that I do travels from, say, a stage show to outdoor installations to parades to private parties to forests to trees to the sea. These are all based on a very elaborate visual concept, and using the world, basically, as a stage. Many of the things I do are site-specific. This [project] will engage students who want to create a very large inflatable and [do] decorating so that it will live inside of Ryan Auditorium. I'll talk to everyone,  then there will be two days of nonstop labor and then, on Sunday, there will be an actual performanceâ€”I don't want to give too much away.

Could you give us an example of the type of project you've done in this context before?

I was invited to the University of California, Davis, and on campus they have these sculptures [of] eight-foot-tall heads that are exclaiming or screaming and I decided to highlight that. With a group of students we created eight-foot-tall head costumes and did a performance using them. It was a multiple effect performanceâ€”very successful. I have a tendency to make stuff that people will follow around; it's easy to follow a highly costumed fool. I've done a lot of other performances at schools and then around the world. I impersonated the pope and called myself the“Nincompope” outside the Vatican and was arrested and held for five hours. I made a little pope costume with my feet sticking out  and I went and sat by the fountain with my videographer. I had a SuperSoaker with gold paint so I'd have holy water to dispense liberally to whoever I could engage in conversation. I was there for a couple hours interacting with the public and then I was literally arrested for“impersonation with acqua pistole.”

How did you get out of that one?

Well, eventually it worked out, the Italians being Italians (and my videographer's name happened to be Jesus, which was fortunate). I told them I was doing shows and was sponsored by the American government, and they finally saw that I was an exhibiting artist at the academy over there. So I was released, and it being Italy, with kisses all around.

I know you want to keep your specific idea shrouded, but is there anything else you think students should know to pique their interest in your workshop?

I think the topic in mind is going to be more specific to the life of the students. It will be big. It will be glorious. It will be funny â€¦ and participatory for those that are interested. I know I've been invited partially because I've heard you have some art classes but not as many as some people would hope.  What we do is not going to require any degree of craftsmanship or knowledge, but enthusiasm and a sense of humor and an ability to work with other people.

Pat Oleszko will give a talk and presentation of her work on Thursday, November 13th at 7:30 p.m. in Sharpless Auditorium. Those interested in participating in a workshop with the artist can sign up then. The workshop begins Friday, November 14th at 4:30 p.m. A culminating performance is scheduled to take place in front of Ryan Gym on Sunday, November 16th  at 4 p.m. These events are free and open to the public.