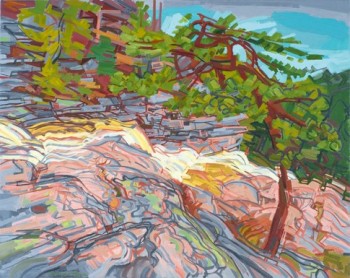 Published
Share
The artist will also give a talk on Wednesday, March 5.

“â€˜Forming and reforming'â€”this is what engages the eye of the viewer confronting a Norman Turner painting,” writes author and critic Martica Sawin in the introductory essay of the exhibit's accompanying catalogue.“It is difficult to stop looking at one of these vibrant landscapes because they resist settling into a stable image seen from a fixed viewpoint, even though all the ingredientsâ€”rocks, trees, a distant barn, cloudsâ€”are there. One's gaze is held by the effort to resolve all the activity of color and line into a coherent whole, while the image verges on fragmenting into its components; the precarious balance keeps threatening to dissolve as one instinctively tries to hold onto it.”

In an essay entitled“On the Structure of Looking,” Turner himself writes,“The image I seek is one of burgeoning, of pouring out or spilling forthâ€¦It is a ceaseless generation that seems ultimately truthful to me, that can be represented by pictures that form and reform, are in a sense made by the viewer, even as the viewer takes them in.”

Norman Turner was born in 1939 in Storm Lake, Iowa and grew up in Iowa City, where his father, a composer, was a professor of music at the University of Iowa. While in high school Turner wrote music that was performed by the chorus and band. At 18 he studied music composition at the University of Colorado. At 19 he learned to cast sculpture in bronze and was a non-matriculating undergraduate in the Iowa Writer's Workshop, working with Vance Bourjaily, Donald Justice and Philip Roth. In 1963 he moved to New York City and, in 1964, became a founding student of the New York Studio School, where his teachers were Charles Cajori, Mercedes Matter, George Spaventa and Esteban Vicente. Turner has had 17 solo shows, participated in over 30 group shows, and taught at Queens College and the New York Studio School. His work has been reviewed in Art News, Art in America, and The New York Times. Writing in The New York Times, John Caldwell described his paintings as“electrified Van Gogh.” Turner now lives in New Paltz, New York with his wife and daughter and divides his time between the Shawangunk Mountains and Vermont's Northeast Kingdom.