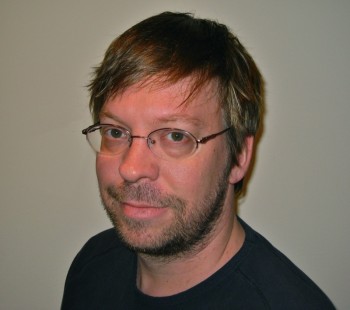 (This article first appeared in the Spring/Summer 2012 issue of Haverford magazine.)

The modern classical music of L.A.-based composer David Arbury '95 has been performed around the world. (Fords in Australia can catch the Paradisa! ensemble playing his new Latin-jazz-inspired suite, La oliva y los saguaros, in July, and renowned soprano Jacqueline Horner-Kwiatek is now touring his art song“Latte” in her Leading Ladies program.) But his latest project finds him entering entirely new territory.

Arbury has written the score for a comedy web series called Couch Surfers, which follows three friends who avoid paying rent by perpetually crashing with willing strangers. The award-winning first season, which ended in March, featured five less-than-10-minute webisodes underscored by Arbury's interstitial surf-punk guitar figures or hilarity-heightening montage music.“I wanted to do it precisely because it is so different,” says Arbury.“Writing music to fit within a scene, or even between scenes, and producing music directly on the computer rather than creating scores for someone else to perform is hugely different for me, and I have really loved the challenge of it. And besides, I miss my rock days, so getting to write that kind of music again is a total blast.”

Another advantage to his work on the show is that it gives him an opportunity to make music again with former classmate Carleton Ingram '95, who plays the guitar parts that Arbury has written.“He and I worked together very closely in D.C. after Haverford,” says Arbury.“He founded a record label there, Resin Records, which I web-designed and helped manage. I played bass or drums in several bands, and Carleton was the guitarist and main singer for all of them.” The two men live in different zip codes these days, but they collaborate via email. It must be a fruitful system, because their partnership will continue for the already planned second season of Couch Surfers.

Additionally, Arbury is preparing for the coming 2012-13 music season, which includes, so far, a work for a Taiko drum ensemble, a choral commission that will tour Ireland and England, and a punk/dance/rave piece for the Iowa State Orchestra.