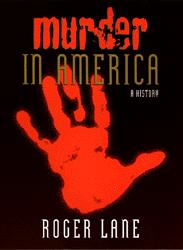 Published
Share
Roger Lane chronicles the history of murder in America in his new book.

First the good news: murder statistics in the United States are holding steady.

The bad news? Not only is the murder rate in the United States five times greater than that of neighboring Canada, but "the character of murder is changing. The killings are getting scarier," explains Haverford College social science professor Roger Lane as he refers to some of America's more recent ideological and serial murders: Ted Bundy's spree in the midwest, the Oklahoma City bombing, the Unabomber.

This spring, Lane saw the release of his sixth book, Murder in America: A History.

The book isn't easy bedtime reading as it provides an overview of some of the most notorious as well as some of the lesser known and previously unrecognized murders that have taken place in America from pre-revolutionary times to the present. The book looks at the recent headline grabbers: the murder of Nicole Brown Simpson as well as the Unabomber and the Manson killings. But it also examines criminals and crime scenes out of the past, including the Salem witch trial, Billy the Kid, Lizzie Borden and Leopold and Loeb.

The first in a series of books on crime and criminal justice to be published by Ohio State University Press, Lane hopes that this comprehensive overview of murder in America will help readers recognize common misconceptions about what causes murder rates to go up or down.

"I start the book by briefly focusing on the Middle Ages to make a point," he explains. "Not even counting infanticide and the unpunished crimes of the rich, the murder rate then was more than twice the murder rate in the modern U.S."

But, he says, the commonly believed catalysts for crime were absent from the time period.

"You have to ask what caused it," Lane explains. "There were no guns; no big cities ... the populations were almost entirely homogeneous; capital punishment was common and was often administered just minutes after the crime; religion and community all were highly respected; yet still the murder rate was exceedingly high."

That paradox, says Lane, dispels some common myths about what causes murder rates to increase. Readers are left with a book "rich with conclusions" on what causes crime statistics to go up or down - including a look at America's growing "gun culture," the country's transition to a post-industrial society and its pervasive legacy of slavery.

Despite his extensive research into hangings, bombings, shootings, stalking and axe murders, Lane says he never got spooked during the year he wrote the book, which shouldn't be a surprise since he devours detective novels in his spare time.

"I'm kind of like a detective, anyway," says Lane. "Detectives work like historians work - something happened in the past and there are clues and we've got to try and reconstruct those events with the clues that are left behind."

A social historian who has previously written books on crime, police and ethnic history in Philadelphia, Lane says his newest book was a natural extension of a lifetime of scholarship, noting that a murder's aftermath leaves a great deal of social history documents, particularly in the form of newspaper accounts and trial documents.

"A murder trial is a marvelous opportunity to find out about how ordinary people lived in a particular time," he says. "You learn about what people were doing moment by moment. It's a rich resource of historical information."

Despite its focus on history, the book has a timeless quality since murder has always snaked its way through human history:

"As fact of life and death, object of horror and curiosity, subject of epic and myth, murder goes as far back as we can dig," Lane writes in the book's introduction. "Cain's slaying of his brother, Abel, is central to the biblical account of human genesis, and the bones of prehistoric men and women show clear evidence of homicide, even cannibalism."