"Missing" Descartes Letter Discovered in Haverford Archives, Will Be Returned To French Owner 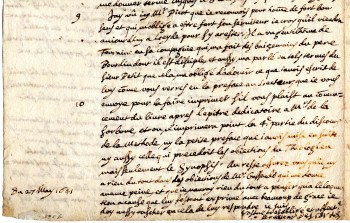 An excerpt of the letter written by philosopher Rene Descartes in 1641.

Published
Share
The long-lost letter appears to have been purloined by one of history's most notorious document thieves some 170 years ago. "There was only one responsible course of action,” says President Steve Emerson.“Do the right thing.”

What's the value of doing the right thing?  In the case of rediscovering a long-lost–and extremely valuable–letter from French philosopher Rene Descartes, the answer for Haverford College appears to be â€˜appreciation, gratitude ... and 15,000 Euros.'

A Dutch scholar learned of the 1641 letter in a Google search last month.  Working with John Anderies, Head of Special Collections at Haverford College, Erik-Jan Bos determined that it was an authentic unknown letter of Descartes.

The philosopher wrote the letter on May 27, 1641 at Endegeest castle, close to Leiden, the Netherlands. It is part of an intensive exchange between Descartes and his friend Marin Mersenne concerning the publication of Descartes' Meditations on Metaphysics, which, together with a series of Objections and Replies by other philosophers and theologians, would be published in Paris later that year, August 1641.

The letter provides insight into the manner in which that work was printed and sheds light on certain key elements of Descartes' philosophy. It also shows that in their original form the Meditations were organized differently. The letter consists of four pages of fine laid paper densely written in iron gall ink. The signature and the handwriting are unmistakably those of Descartes. Originally part of the collection of the Institut de France, this correspondence along with thousands of other letters and documents were stolen by Count Guglielmo Libri (1803–1869), professor of mathematics at the CollÃ¨ge de France and secretary of the Committee for the General Catalogue of Manuscripts in French public libraries. In 1850, Libri was sentenced in absentia for several robberies, including that of the Descartes letters, but he had fled to England and sold the documents to collectors and booksellers.

Which is how the letter wound up at Haverford.  Charles Roberts, Haverford Class of 1864 (for whom Roberts Hall is named), collected thousands of autographs in his lifetime–the Descartes letter among them–and his widow bequeathed the massive collection to the College more than 100 years ago.

Since then, the collection has played a role in furthering Haverford's core mission of enabling undergraduate students to conduct original research and scholarship with primary source material, in close partnership with faculty.  For example, Conrad Turner, class of 1981, translated and analyzed the letter as part of a Junior-year History course that gave students the chance to work with a single document for an entire semester.  (Dr. Bos, the Dutch scholar, reviewed Turner's paper and called it“truly a fine piece of work. Had the author submitted it to a major international journal, it would have been published immediately.”)

Alerted to the likelihood that this valued– and, no doubt, valuable– document had most probably been stolen, Haverford president Stephen G. Emerson '74 immediately contacted his counterpart at the Institut with the exciting news of the discovery, and an offer to return it.

“Haverford values social responsibility and commitment to community as much as we value rigorous academics,” says Emerson. “While we've certainly benefited from having the Descartes letter in our collection–the Turner paper is exhibit A in the case for small liberal arts colleges like Haverford–there was really only one possible course of action:  do the right thing, and offer to return the letter.  We certainly hope someone else would do the same for us if the shoe were on the other foot.”

And while Emerson wasn't particularly surprised when the head of the Institut replied–effusively–that he'd be happy to accept the offer, Emerson says he was“stunned” to further read that he was being invited to Paris to accept, on Haverford's behalf, a cash award from from the Institut in recognition of the College's repatriation of the letter.

“The gesture honors you and exemplifies the depth of moral values that you instill in your students,” wrote Gabriel de Broglie, Chancellor of the Institut. “I propose to offer a prize on behalf of the Institut de France in the amount of 15,000 euros.”

de Broglie also detailed the notorious history of this and other so-called“Libri letters,” named after the thief.“[In] 2006 and 2009, another of the 'Libri letters' was sold at auction in Switzerland,” he said. “After I protested vociferously and publicly on both occasions in the name of the Instiut, the letter didn't find a buyer, but it proved impossible for us to raise the very large sum that the seller demanded...”

The College has not yet decided how to use the award, but will very likely use the funds to directly support student work in Philosophy, History and French thought, thereby deepening the intellectual resonances inspired by the Descartes letter itself.

“We couldn't be more pleased with how this has been resolved,” concludes Emerson. “In our ever-shrinking world, when strangers become friends and then partners at the click of a mouse, we want to do all we can to show, by example, what it means for scholars and citizens to collaborate for the common good.”