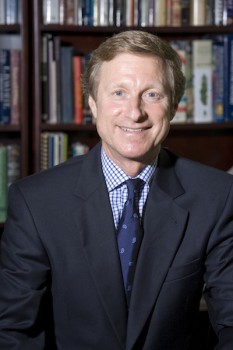 Published
Share
Our Vice President for Institutional Advancement is pursuing an interest in international affairs. Ann West Figueredo '84 has been appointed Interim VP.

Michael Kiefer, Vice President for Institutional Advancement, will be stepping down to pursue new career opportunities with a special focus on international affairs, a well-known interest.  He will complete his current duties on December 31, 2013.  As of January 1, 2014, he will serve as Special Assistant to Haverford College President Daniel H. Weiss through June 30, 2014.

"Michael arrived in 2008 and expanded the reach and effectiveness of our Advancement operation, which has included Alumni Relations and Annual Giving, Development, College Communications, and Advancement Services," noted President Weiss in an announcement to campus.  Kiefer also served as Assistant Secretary to the Corporation of Haverford College, staffed the College's International Council, and established the Haverford College Foundation (UK) Limited, which enables residents of the UK to make tax advantaged gifts to the College.  "He has served ably on our Senior Staff while managing the College's relationships with many of our most generous donors," President Weiss further noted.  As chief fundraising officer, Kiefer directed the planning and execution of the first four years of a seven-year comprehensive campaign, which will be publicly launched in the fall of 2014.  In the wake of the world financial crisis and our presidential transition, he and his colleagues have delivered two of the College's best fundraising years in history. "Haverford is a wonderful community that sits on a foundation that is rock solid," said Kiefer.  "I will miss the community and values and individuals that have meant so much to me for these five years."

Ann Figueredo, Director of Leadership Gifts, will serve as Interim Vice President for Institutional Advancement, effective January 1, 2014.  A member of Haverford's class of 1984, she earned an MBA from Columbia University and has more than 25 years of business and advancement experience working at senior levels of Fortune 500 companies and not-for-profit organizations. She joined Haverford's advancement efforts in 2008.

In a related development, College Communications will now report directly to the President, a change that reflects Communications' evolution into a central and independent role serving all Haverford constituents equally.  The department supervisor, Chris Mills, will also maintain a dotted line relationship with the Vice President for Institutional Advancement with respect to administrative matters including budgeting, human resources, alumni and community relations, and Board committee participation.

"We will have opportunities to celebrate Michael's many contributions to Haverford after the holidays as we welcome Ann into her new role," President Weiss concluded.  "I hope you will join me, the Board, and Senior Staff in wishing both of them well."