Mark Rembert '07 Takes a Green Approach to Revitalizing His Hometown 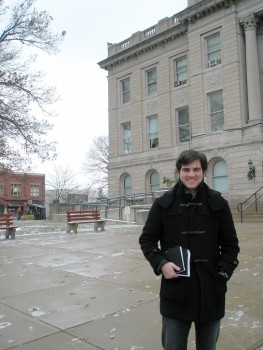 Mark Rembert '07 in front of the Clinton County Courthouse in Wilmington.

Published
Share
Rembert and a friend are the founders of Energizing Clinton County, a grassroots organization formed in response to a looming economic crisis in Wilmington, Ohio.

Mark Rembert'07 was not about to stand on the sidelines while his hometown of Wilmington, Ohio faced its most serious economic crisis in its 200-year history.

In response to the recent news that the international air express transportation company DHL Global would be pulling out of the cityâ€”leaving up to 10,000 residents without jobsâ€”Rembert and his childhood friend Taylor Stuckert took action. They teamed up to form Energize Clinton County, a grassroots organization that seeks to designate Wilmington and its surrounding county as the country's first“Green Enterprise Zone.” The aim is to attract and reward employers who will offer sustainable,“green-collar” jobs to displaced workers.

Rembert, an economics major at Haverford, had been working at a Philadelphia PR firm when he decided to return home in August and reconnect with his family and his town. He was dismayed to find that little was being done to prepare a strategy for economic redevelopment in Wilmington once DHL left.“I had been thinking about the idea of green development,” he says,“so Taylor and I started writing letters about it to the editor of our local paper, and we got an electrified response from peopleâ€”we really tapped into something.” They forwarded their ideas to friends across the country, met with public officials and community leaders, and set up a comprehensive website (http://energizecc.com) outlining their vision and inviting others to get involved.“We want to propel this issue to a state and national level,” says Rembert.

Rembert believes Wilmington and Clinton County are the ideal places to serve as a national example of sustainable economic development.“Wilmington has a concentrated skilled workforce to spur green development across Ohio,” he says.“There's a critical mass of workers who can take on the jobs of a green economy.” There would be opportunities for equipment manufacturers, construction workers, plumbers (to install solar water heaters), electricians (to fit homes with solar panels), and product retailers, among others.

Clinton County's geographic location also gives it an advantage; it's within half an hour of three major metropolitan areas.“It's positioned to become an economic hub,” says Rembert, who envisions Wilmington as a center of research and development that will draw people from across the state.

“We're now in the process of creating strategies and identifying policy steps to make Wilmington a competitive zone for this kind of project,” says Rembert.“It could be a great storyâ€”how a town on the brink of economic collapse turns into a model of green development for the entire country.”