Madeline Kreider-Carlson '10 Gets "Crafty" with Her Watson Fellowship 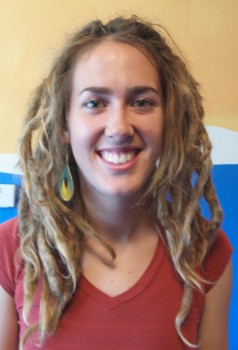 Madeline Kreider-Carlson '10 grew up surrounded by craftsâ€”and crafters. As a child, she spent many hours learning sewing, spool knitting, ceramics and weaving from her grandmother in Kansas, and recalls family gatherings when her mother's Mennonite relatives pieced quilts.

The history major (and concentrator in Latin American and Iberian Studies) will combine her lifelong love of crafts with her interest in international cultures for a year-long project called“To Craft a Community: Women's Craft Organizations and Sustainability.” It is funded by her Watson Fellowship, which sponsors independent research and travel outside of the United States.

Kreider-Carlson will study the art and socio-economic importance of crafts in Mexico, Egypt and Indonesia, looking at women's craft organizations and the ways they promote community and economic vitality. She is especially interested in how these organizations provide women with equitable livelihoods, keep cultural artisan traditions alive, and incorporate sustainable materials.

Kreider-Carlson's family influenced not only her fascination with crafts and craft-making, but also her passion for social justice. In the 1960s, her grandmother opened the first retail store for Ten Thousand Villages, a nonprofit fair-trade outlet for craft producers in underdeveloped countries. Kreider-Carlson volunteered in the store as a teenager.“I learned a lot about the ways Ten Thousand Villages' artisan partner groups envision craft production as a means of development,” she says.

The idea for her Watson project grew out of her undergraduate studies in history and economic development, as well as her Center for Peace and Global Citizenship internship in Nicaragua, where she worked with an environmentalist women's paper cooperative and recycling organization.“I witnessed a group of women working to provide a living for themselves and their families, change the way their community interacts with the environment, and create beautiful crafts,” she says.

While abroad, Kreider-Carlson will continue exploring the ways women come together and reach out globally through their art, as well as learn more about the creative process of crafting.“I hope to grow as an artist, and become an inheritor of craft traditions from women across the world,” she says.