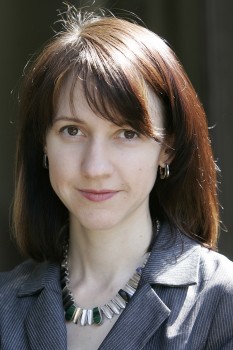 Published
Share
The assistant professor, who once pursued a career as a concert cellist, specializes in the sociology of music.

Throughout high school and her undergraduate years, Haverford's new Assistant Professor of Sociology Lisa McCormick was certain she knew where her life was headed: toward a performing career as a cellist.

Then she won a Rhodes scholarship to study at Oxford.â€œThat was what took me out of the conservatory,” says McCormick, who has both a B.A. in sociology and a B. Mus. in cello performance from Rice University.“And that was when I realized I could do more for music as a sociologist than as a rank and file cellist.”

McCormick went on to specialize in the sociology of music, and recently completed her Ph. D. in Sociology at Yale with a dissertation entitled, Playing to Win: A Cultural Sociology of the International Music Competition, which she is expanding into a book  for Cambridge University Press.

McCormick, whose research led her to look at the lively discussions music competition audiences often engage in, is also working on an article about the dwindling role of the music critic in today's changing media landscape. “My big, over-arching research goal is to bring art and culture back to the heart of public life,” says McCormick, who aims to shift the sociology of music away from the“production perspective” she says has dominated the field for 30 years.

“Most sociologists of the arts are interested in organizations and careers and marketsâ€”the social networks of people who happen to produce artwork,” she says.“In this kind of analysis the art doesn't matter, it becomes merely an object. I'm trying to come up with a different approach that doesn't bracket the art work in this way, that is more interdisciplinary.”

While scholarly research has taken precedence over playing the cello, McCormick still has fond memories of performing. Among the high points of her musical career was a concert at Warsaw Autumn, an international festival of contemporary music in Poland, where she accompanied legendary singer and composer Joan La Barbara in Morton Subotnick's chamber opera Jacob's Room.“In graduate school I played a lot of pick-up church gigs and chamber music,” she says.“I especially love playing continuo, which in Baroque music is a special accompanying role. You are a soloist, but no one realizes it.”

During the current academic year, McCormick will be teaching“Foundations in Social Theory,”“The Sociology of the Arts” and“Self and Society,” which looks, she says,“at how the concept of the self developed at the dawn of modernism, and at how person-hood is defined in other cultural contexts.”

McCormick says she could not be more pleased to have landed at Haverford, which strongly reminds her of her undergraduate experience at Rice.“Getting my undergraduate degree at a liberal arts college was one of the best things I've ever done,” she says.“We had an honor code too and I thrived in that kind of environment, where the attitude was one of trust. I loved being around ambitious, incredibly intelligent people in a place that didn't foster competition, but celebrated excellence and achievement of all kinds.”

“I've been to lots of different universities with very different styles of education. I didn't like teaching classes with 80 or 100 students. I didn't feel like I was really educating them. As a teacher, I wanted to be somewhere where I could know my students and feel like we were accomplishing things together in the classroom. And I wanted to be in a place where I could pursue my slightly quirky interests and be surrounded by really bright colleagues.”

“Haverford was everything I was looking for,” she says.“It's like paradise. If it's a dream, don't pinch me.”