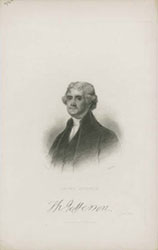 Published
Share
Letters, books and maps offer unique peeks into the history of America's geographical expansion in the exhibit“'Under My Wings Everything Prospers:' Americans in New Territory."

Letters, books and maps offer unique peeks into the history of America's geographical expansion in the exhibit â€œUnder My Wings Everything Prospers:” Americans in New Territory, featured in the Foyer and Sharpless Gallery of Magill Library through September 30.

Showcasing the events leading up to the Louisiana Purchase and the Lewis & Clark expedition, the exhibit includes original correspondence by the two explorers, Thomas Jefferson, James Monroe, James Madison, and Robert Livingston, who was U.S. Minister Plenipotentiary to France; a map of the United States in North America with British, French, and Spanish dominions marked according to the Treaty of 1783; examples of contemporaneous humor, such as first edition narratives by Davy Crockett and Mark Twain's Life on the Mississippi; and portraits and engravings of all involved parties.

The letters, a significant component of â€œUnder My Wings,” came to Haverford courtesy of alumnus Charles Roberts Class of 1864, according to Diana Peterson, manuscripts librarian, archivist, and curator of the exhibit. A famous story tells of Roberts' encounter with Abraham Lincoln while the president was in the area as part of his“Whistle Stop Tour.” Roberts obtained Lincoln's autograph, and was inspired to collect other significant materials that led to the acquisition of documents by such historical figures as Jefferson, Monroe, and Livingston, but also Darwin, Napoleon, Chagall, and Jenny Lind. He amassed more than 12,000 items, including letters and portraits. After Roberts' death, his widow Lucy Branson Roberts donated his collection to the College in 1902.

Roberts' donation has strengthened the library's non-Quaker collection, which now stocks more than 20,000 items.“There are so many topics on which we could put together exhibits,” says Peterson.

Members of the Special Collections Department chose â€œUnder My Wings” to coincide with this year's bicentennials of the Lewis & Clark explorations and acquisition of the Louisiana territory. In addition to presenting physical evidence, the exhibit provides a philosophical and diplomatic context for the ideas that led to such events as the Monroe Doctrine of 1823, the Doctrine of Manifest Destiny of 1845, and the acquisition of Alaska in 1867.

“You can see how so much of America was the result of acquisition, and how political thinking pushed territorial expansion and tempted others to conduct further explorations of new territories,” says Peterson.“The exhibit also looks more deeply into the question, â€˜At what cost?'”