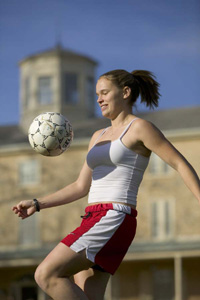 Junior midfielder Elena Kozakewich (Brookline, Mass./HS), who led Haverford College to its best season record ever (15-2-2), has been named to the first-team of the 2004 National Soccer Coaches Association of America/adidas Women's NCAA Division III All-America Team.

The inaugural All-America selection in her team's 19-year history, Kozakewich is the first Haverford soccer player â€” male or female â€” to earn first-team national soccer honors since Gyula Kovacsics and Hal Taylor made the men's Division I All-America team in 1960.

Kozakewich, who provided career-highs of eight goals and 12 assists in 17 games played in 2004, had previously been named Centennial Conference Player of the Year for leading the Fords to an undefeated record in league play (8-0-2). She had also appeared on the NSCAA's All-Middle Atlantic region team along with first-team forward Ashley Emmons (Mesa, Ariz./Dobson HS) and third-team midfielder Meej Kim (Annapolis, Md./Key School), both Haverford juniors.

Kozakewich earned CC Player of the Week honors on Sept. 20 by assisting two goals, then scoring the game-winning goal herself â€” all in a span of 5:20 in the second half Â­ as the Fords won at Moravian, 3-2. The game-winner was her second in as many games, and she next tied an HC-record with three assists at Gwynedd Mercy, the Fords' third straight come-from-behind road win.

As a first-team selection, Kozakewich will be invited to the NSCAA All-America Luncheon, which will be held on Saturday, Jan. 15, as part of the 2005 NSCAA Convention in Baltimore, Md. Founded in 1941, the NSCAA has grown into the nation's largest coaching organization regardless of sport. Its 17,000 members coach at all levels of the game and are dedicated to coaching education as well as recognizing achievement in soccer. The NSCAA's annual convention is“The World's Largest Gathering of Soccer Coaches.”