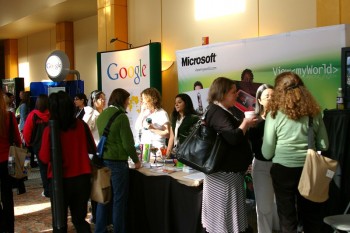 The Grace Hopper Celebration of Women in Computers, held in Denver in October, was an inspiration to Erica Greene '10 and Hannah Kovacs '09, who attended the event with the help of a KINSC student travel stipend.

Published
Share
From a research opportunity in Sweden, to a scientific conference in Denver-the new program gives students the chance to explore their major outside the classroom.

Since its creation, the Koshland Integrated Natural Sciences Center (KINSC) has made the pursuit of science at Haverford a dynamic, collaborative experience. Now, a brand new KINSC-funded travel stipend program is allowing students to explore their majors beyond the walls of the classroom.

So far this fall, five students have already taken advantage of the new program. One went to Sweden to do laboratory research and two others journeyed to a computer science conference in Denver. Two '08 graduates, Alexandra Amen and Jessica Dodd, were also able to take advantage of the funding. Early this October, they traveled to Austin, Texas, to present their senior theses at a conference for the Society for Psychophysiological Research.

For the KINSC, the travel stipends mark an exciting first. According to Robert Fairman, associate professor and chair of the biology department, all travel opportunities were previously funded by the college, rather than the KINSC itself. This new approach also sets itself apart in that it emphasizes exploration, rather than student-directed presentations. Says Fairman,“Sometimes the outcome of this travel is to bring back important information to our community rather than showcasing student scholarship at other venues.”

Thanks to a travel stipend, Winn Johnson '09 spent her fall break working with Sara Linse, a colleague of chemistry professor Karin Ã…kerfeldt, at Lund University in Sweden. Winn reports that, through this meeting with the minds at Lund University, she was able to make an important discovery in her own research on calmodulin target proteins for her senior thesis. She plans on presenting her findings in Ã…kerfeldt's and Fairman's labs this semester.

Just as rewarding as networking within the lab were the connections she formed with colleagues outside it.“Most of us play musical instruments and like to cook,” Johnson says.“The interesting, intellectual people who worked in the lab made me think even more strongly that these were the sort of people I wanted to work with further and that I wanted to continue to graduate school.”

Also seizing the opportunity to travel were Hannah Kovacs '09 and Erica Greene '10, who attended the Grace Hopper Celebration of Women in Computers, a symposium held in Denver, Colorado. Both computer science majors say they gained a global perspective on the role of computer science in national and international communities, and the vital role of women in this field. Most interesting to Greene was what she learned about the increasing role of computer science in helping the disadvantaged. Describing another speaker's efforts to launch a One Laptop Per Child program in Ghana, she says,“I was inspired by how many people were using their [computer science] background for humanitarian work.”

For Kovacs, the conference offered a glimpse into the history, as well as the future, of women's roles in a“field that is overwhelmingly dominated by men.” This important legacy is a“mandate” to her as a woman in computer science, says Kovacs, to“explore the possibilities that lie yet unexplored.”

Other students majoring in science will soon have the opportunity to forge their own international networking experiences. In a continuation of this new program, the KINSC will be offering more travel stipends this summer. Interested students should contact Natalie Marciano, the program coordinator at KINSC, at nmarciano@haverford.edu or x1403.