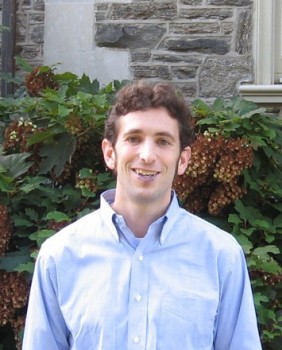 Published
Share
With a research focus on Greek philosophy, Yurdin helps students find contemporary relevance in the writings of Socrates, Plato and Aristotle.

In an age of instant messaging, iPhones, social networking and Google, how relevant are the writings of a bunch of guys who mused on life 2,000 years ago? For Joel Yurdin, Haverford's new assistant professor of philosophy, the work of ancient thinkers such as Socrates, Plato and Aristotle couldn't be more current. And he's found the key to bringing his students around to this point of view.

“The challenge of teaching [the ancient philosophers] to undergraduates is that you have to expose them to a text that might seem dusty and old-fashioned,” says Yurdin.“Then you need to brush off the dust and demonstrate the immediate and practical interest of the questions these philosophers are asking. And they are asking: How should one live? What kind of person should one be? Those are crucial at any time, but they are especially important when you are 20 years old and thinking about how your life is going to unfold.”

Among the“dusty” texts he's seen students respond to is Meno, a Socratic dialogue written by Plato which explores the questions of what virtue is and whether it is teachable.“I think at first students think virtue doesn't have much relevance to modern life. But in this text virtue is about human excellence, and about states of character such as courage, wisdom and justice that apply to life just as much today as they did in antiquity.”

Yurdin, who received his Ph.D in philosophy from the University of California, Berkeley in May 2008, counts among his research interests Greek philosophy and philosophical psychology. His dissertation, "Aristotle: From Sense to Science," looked at how perceptual states relate to explanatory knowledge. Also among Yurdin's research pursuits is the role of rationality in perception, memory and imagination.

Says Yurdin,“Many of us think, and Aristotle did too, that many non-human animals also have perception, memory and even imagination.”  Yet we also believe that our own perception is informed by the human capacity for rational thoughtâ€”something we don't ascribe to non-human animals. The question he is exploring: How do we reconcile these views?

Yurdin, whose life at Haverford got off to a particularly exciting start when his wife Kirstin Knox gave birth to the couple's first child, a daughter, three weeks into the semester, says it was the chance to“be part to be part of an intellectual community in which there was close interaction between faculty and students,” that drew him to the college.

Even though few of his students are philosophy majors, he says,“The level of student engagement and intellectual curiosity here makes teaching philosophy a real pleasure.”Says Yurdin,“The bulk of my students are going to be in introductory level classes, and  the point is to help them sharpen their reasoning skills, and realize that there is value in getting a reflective understanding of some everyday parts of human life, such as moral practice, and the nature of knowledge and evidence.”

“It's also exciting to see them engage with these canonical authors,” he adds.“To see there is real wisdom in some of these works and realize that they can raise their own questions and that their view is important.”