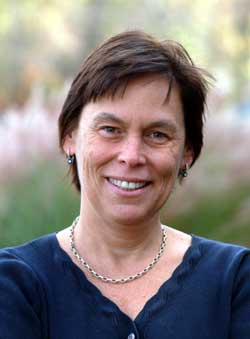 Emily Cronin is the Program Coordinator for the John B. Hurford Humanities Center. She promotes and coordinates the Center's initiatives, particularly in the areas of scholarship, teaching, arts, and forums. She is glad to be joining Haverford's mission in this capacity, as her passion is humanities and the arts, and being the first professional employee of the Hurford Center means that she can be part of defining the Center's future. She enjoys the college environment, the intellectual stimulation, and most of all, working collaboratively with interesting and creative people.

Before coming to Haverford, Emily was the PR and Publications Director at The Episcopal Academy in Merion for 16 years. She was born in New York City, and grew up on Long Island. After graduating with a B.A. in Theater from Smith College in Massachusetts, she got a job at Tulane University in the Theater department. This job lead her into a long acting career â€” she first entered the realm of public relations by serving as the PR Director at The Contemporary Arts Center in New Orleans, and has appeared in several plays, musicals, and even television commercials. Her career has also taken her to some far-flung regions of the globe, like Katmandu, China, and Tanzania. Fortunately, she is now living in the oldest house in Narberth (built in 1722) so her commute is reasonable, and does not involve crossing oceans.

Emily's office is currently way up on the third floor of Founders, in room 310. However, on January 5, 2005, the Humanities Center will have a new, centralized home in Stokes, and Emily will be moving there along with her fellow Center employees.