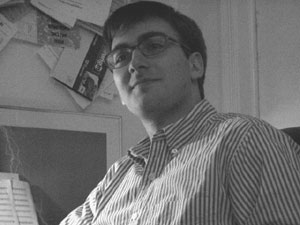 Published
Share
The works of an up-and-coming composer and current Haverford student will be performed for the first time at a one-night-only concert, March 27 at 7 p.m. in the Union Building's Macrate Recital Hall.

Bomback has assembled musicians from the Haverford-Bryn Mawr Orchestra to perform in the concert, which includes a solo piece for a violin; a piano solo; a three-piece ensemble for flute, viola, and piano; a string sextet for three violins, two cellos, and one viola; a choral duet for mezzo-soprano and baritone with piano accompaniment; and a woodwind quartet titled“Endeavor,” Bomback's most recently completed work and certainly his“most difficult piece” to date, according to him. In fact, he used a portion of his grant funds to hire professional musicians specifically for“Endeavor.”

Music major Bomback has been experimenting with melodies since childhood. He started improvising on the piano at age 10.“When I was 13,” he says,“I developed a notation system that only I understood, and began writing down my improvisations.” As a senior in high school he took an AP course in music theory and composed his first full-length work, an overture for a chamber marching band at New Rochelle High School in New Rochelle, N.Y.

“I didn't intend to major in music at Haverford,” he says,“but I fell in love with the department.” Throughout his years here his compositions have advanced from what he calls a“safe tonal area” to arrangements that are more harmonically complex.“I've moved away from standard four-four rhythms toward more complicated ones, I don't always use bar lines, and I may change the meter at every measure,” he says.

Bomback favors“lexical juxtaposition,” championed by University of Pennsylvania professor George Rochberg in the 1970s:“I like to blend different musical vocabularies together, such as tonal and non-tonal musics.” He also uses“vernacular crossover,” blending traditional and popular music elements and forms.

After graduating this May, Bomback will attend City University of New York to pursue a Ph.D. in musicology.“I get as much pleasure studying music as I do composing it,” he says. He plans to focus on the music of contemporary composers, and is getting a head start on his studies at Haverford; his senior thesis explores string quartets written after World War II.

“Unheard of: A Concert of New Music” is free and open to the public. Bomback will provide scores for the audience and present brief lectures between each piece.