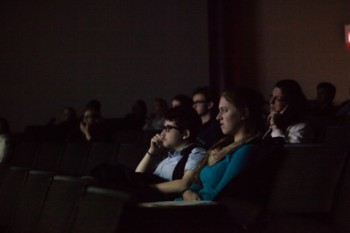 Published
Share
Even though Haverford does not have a formal film studies department, it offers those interested in filmmaking a wealth of opportunities. The Tri-Co Film Festival held on May 7 will feature students' projects.

With an exhausted yet focused look in their eyes and large black headphones around their heads, Dawit Habtemariam '15, Harlow Figa 17, and Anne Bullard-Werner '15, along with her project partner Mark Loper '15, spent hours working on large Mac screens in the Instructional Technology Center (ITC) at Haverford last week.

All except Habtemariam were working on individual films for“Advanced Documentary Video Production,” a course this spring taught by documentary filmmaker and Artist-in-Residence Vicky Funari. Habtemariam is enrolled in Visiting Assistant Professor of Independent College Programs John Muse's“Film on Photography.”

Habtemariam created a short film about the lynching of African Americans in the United States using black-and-white photographs that he found from books. He worked alongside other film students, who stayed up past 3 a.m. in the ITC trying to finish editing their films on time last week.

Despite the lack of a formal film studies department at Haverford, students are increasingly engaging with visual mediums, especially filmmaking, both inside and outside the classroom. For instance, Catherine Casem '15 created an independent film project in 2013 called Bitter Root with the support of the John B. Hurford '60 Center for the Arts and Humanities (HCAH).

This year Habtemariam's and Figa's short films have been selected for the fourth annual Tri-Co Film Festival being held at the Bryn Mawr Film Institute (BMFI) on May 7.

Founded in 2012 by Erica Cho, who teaches film and media studies at Swarthmore College, the Tri-Co Film Festival showcases selected works by students from Haverford, Swarthmore and Bryn Mawr College that cover a variety of genres and aesthetics.

Filmmaking at Haverford has evolved considerably in the past few years thanks in part to the continued efforts of HCAH, Muse, and Funari. This year, HCAH helped sponsor the Strange Truth Film Series, in which filmmakers such as Ilisa Barbash, Lucien Castaing-Taylor, Scott Stark, and Maureen Gosling visited Haverford and screened their films at BMFI.

â€œThe Strange Truth Film Series showed me a diverse range of films that engage with documentary method and materials in different manners,” says Zhang, a film and media studies independent major at Bryn Mawr.“They challenge us to rethink our preconceived notions of what documentary films could be. I particularly enjoyed talking to the filmmakers after the screening to share thoughts and questions.”

The documentary students have the freedom to create movies on any topic of their choosing. In the film T, Figa looks at gender identity; Christine Dickerson's BMC '15 movie, About My Brother, explores familial relationships, and Sticky Wicket is a take on cricket at Haverford by Danny Rothschild '15, who captains the school's cricket team.

The documentary students come from a variety of academic disciplines, a trend that highlights the broad-ranging interest in filmmaking among Bi-Co students. For instance, Loper is pursuing biology; Dickerson is an art history major, and Rothschild is studying history along with a minor in German.

â€œI'm interested in filmmaking because narratives and representation of cultural values, of climate change, of ways of being are integral to both anthropology and environmental studies,” says Caleb Eckert '17, who is studying those subjects at Haverford.“Filmmaking and analysis allows me to engage with others in the world, enabling me to come to the table with my knowledge while also opening myself up to others through a creative process.”

Students enter filmmaking having gained some experience either in high school or during other extracurricular activities, or they are newly introduced to it through film theory and production courses like those taught by Funari and Muse.

â€œWhat I particularly enjoy about working with Vicky is the level of dedication she shows in her class,” Zhang says.“She doesn't teach just so that her students could feel competent with cameras and with producing videos. She teaches in the mindset that each one of her students is someone who could be potentially cultivated into a filmmaker.”

â€œBecause there are only twenty-four hours in a day, obviously there is going to be a struggle between getting your artwork done and getting your teaching done; they end up getting pitted against each other,” says Funari, who is concurrently filming a local project at a swimming pool in Ardmore.

â€œBut I try to think of [filming and teaching] as two aspects of my work that somehow must be made to feed each other,” she says.“That's what I am trying to do.”

Screening of“Still in Love: New Films by the Students of `Film on Photography'" will take place on Sunday, May 10, in Chase Auditorium.