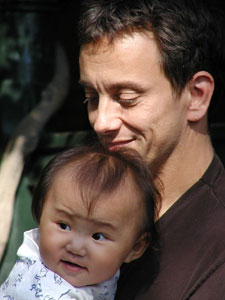 Published
Share
Visiting Assistant Professor of German Christopher Pavsek aims his new documentary filmâ€”also titled To Those Born Afterâ€”at future generations. The film will be screened at the International Documentary Festival in Amsterdam, Nov. 24 through Dec. 4.

In the late 1930s, exiled German poet Bertolt Brecht wrote“To Those Born After,” dedicated to the post-Nazi generation, in which he imagines an optimistic future fueled by hope and humanity. In a similar fashion, Visiting Assistant Professor of German Christopher Pavsek aims his new documentary filmâ€”also titled To Those Born Afterâ€”at future generations. The film will be screened at the International Documentary Festival in Amsterdam, Nov. 24 through Dec. 4.

Like Brecht's poem, Pavsek explains in his director's statement,“This film is also made in dark timesâ€”of global war, environmental collapse, the unchallenged reign of capitalism, absolute decadence in public politics, and moreâ€”and also attempts to imagine a better future and with it a transformed audience to whom the film is directed.”

To Those Born After is part of a planned trilogy; the first film, 2002's The One and All, explored patriotism and religion in post-9/11 America. This newest film lacks a conventional narrative and is entirely conceptual, consisting of 28 minutes of images collected from magazines, newspapers, and the Internet as well as original footage and sound excerpts from an essay by John Berger, speeches by George W. Bush and music by Pavsek. The final image features Pavsek's eldest daughter, Sophie Zoe Lesjak, who turns toward and then away from the camera as some of the final lines from Brecht's poem are cut in as intertitles:“You who will emerge from this flood, think of the dark times. You, however, when it has come to pass that mankind has saved itself, think of us with forbearance.”

Pavsek studied film in graduate school and made his first documentary, Welcome to the New World Order (2000), about the AIDS crisis in Vietnam.“That film was very conventional,” he says,“and I have not made a film like that since. Now, I'm much more experimental.”

To Those Born After took Pavsek about three years to create. When it was completed in August, he submitted it to the International Documentary Festival Amsterdam, considered to be the most important documentary festival in the world. The film will have its world premiere during the festival, as part of the Silver Wolf competition for documentaries under 60 minutes. Pavsek also hopes to arrange a campus screening sometime during the spring semester.

When considering audience reaction, Pavsek wants to affect his viewers in two ways.“Many of my friends tell me that the film is depressing, but the truth is that the world, not the film, is depressing,” he says.“I want to awaken people to the current nightmare, and raise awareness of the dramatic transformation our world is going through today, especially in this country.” He also wants to encourage his audience to take pleasure in intellectual pursuits:“I want them to come away with a desire to watch difficult films.”

More information about To Those Born After can be found at www.pavsekfilms.com.