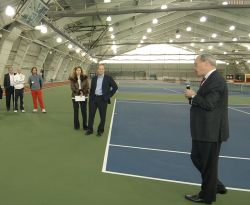 Howard Lutnick and his sister Edie (center) at the dedication ceremony for the new tennis and track facility, with President Steve Emerson '74 at right.

Published
Share
The gift from Howard Lutnick '83 honors his brother Gary, who died in the attacks of 9/11.

Haverford now has a state of the art indoor tennis and track facility, thanks to the generosity of Board of Managers Vice Chair Howard Lutnick '83.

The four courts and 200-meter oval that comprise The Gary Lutnick Tennis & Track Center are located in Alumni Field House and are named in honor of Lutnick's brother, who died in the attacks of September 11, 2001. Athletic Director Wendy Smith '87 says the new facilities will have a“transformative” effect on Haverford athletics. “These surfaces are, without question, the very best available and ensure that we are providing our student athletes with the best possible opportunity to excel.”

Lutnick, who was on the tennis team while a student and still gets on the court twice a week, said he looks forward to the effect the surfaces will have on recruitment, particularly for tennis players who, until now, have only had access to outdoor courts. “When students come by to take a look and ask, â€˜What do we do when it's cold?' you can't say â€˜Go into hibernation,'” says Lutnick. “Anyone who walks through here can put this up against anything anywhere else.”

At Saturday's dedication ceremony, Lutnick and his sister Edie were joined by student athletes, coaches Tom Donnelly (track), Fran Rizzo (track and field) and Sean Sloane (tennis), as well as friends of the College, and alumni, including President Steve Emerson '74.  Like many alums, Emerson knew the Field House for its dirt track, the dust kept down with machine oil. “I remember too well running 440's on the dirt and oil track,” recalled Emerson in his remarks at the dedication ceremony. “So thank you, Howard, for demonstrating your commitment to Haverford in a way that reminds us that if we want excellence, we need to build excellence.”

The tennis surface, called Mondo Ten (created by Italian company Mondo) is a multi-layer system designed to optimize shock absorption and uniform speed of play.  The Super X FTX track, which boasts a bio-mechanical design that improves athlete safety and enhances speed, also comes from  Mondo, which has been the official track surface supplier to the Olympics since 1976.

The renovations complement the dramatic improvements to Haverford's athletic facilities that began with construction of the award-winning Gardner Integrated Athletic Center (GIAC), also supported by a generous gift from Lutnick.  And just last fall, the College dedicated Swan Field, an artificial turf surface, in memory of longtime coach and administrator Dana Swan.

“The GIAC made the purpose of the Field House uncertain,” said Lutnick as he marveled at a space that is virtually unrecognizable as the facility he knew as a freshman.  Lutnick characterized the transformation as turning“something that was a negative into an incredible positive.  To think I can put my brother's name even here, in the Field House.   It takes us even even closer to our goal:  to be the best we can be, being us.”