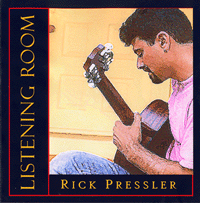 Rick Pressler on the cover of his CD, "Listening Room."

Haverford: How does your current work compare with what we heard from you when you were a student here -- instrumentation, style, and so forth.

Rick Pressler: I've dug a lot more deeply into jazz and picked up some ethnic roots, particularly in klezmer music. I spent a long time in the rock/folk music world and I've developed a much greater appreciation for triads and simpler structures. This has really broadened my understanding of jazz.  As a student, I was interested primarily in dissonance and very angular melodies combined with driving rhythms; it wasn't very accessible and had little emotional subtlety to it. I'm much more interested in music that has a narrative element. Great jazz soloists are essentially storytellers...they grab you by hand, tell you something about the music, and share their point of view. I think I've become more interested in music that offers a point of view which I distinguish from music that merely conveys an attitude.

HC: What other musical paths have you journeyed since leaving HC?

RP: I discovered klezmer music about ten years ago and it's become a major influence on what I do. Klezmer has an incredible capacity for moving people to both tears and laughter, and I am continually struck by  how much audiences--and not just Jewish audiences---respond. It also offers a distinct variation within the jazz universe. Klemzer tunes offer remain harmonically static--long stretches of D minor chord--while the scale goes all over the place. It's an adventure in harmonic minor variations, something I was never particularly strong at.

I've also become more of a soloist and done the bookstore/coffeehouse circuit. I've learned how to maintain my focus with a cappuccino machine firing off nearby.

HC:  Tell us a tale that reveals what life as a musician has meant for you.

RP: I'll have to think about this a bit more--all my stories are really pretty depressing...empty clubs, failed record deals, unreliable booking agents. I've made great, lifelong friends. That makes up for a lot.

HC. Tell us about the instruments you are playing.

RP: I'm still playing that Standel (semi-hollow body electric guitar) . It dates from about 1971--my first electric. It's in pieces right now, but I'll repair it soon. But my primary instruments are a D'Aquisto DQ-CRE which is an unusual chambered guitar about the size of a Les Paul. It sounds and plays like a big fat archtop jazz guitar but is much easier to deal with on the road and at higher volumes. I use my grandfather's old Ampeg Gemini amplifier with it. Lots of old tube amp mojo. When I'm too lazy to carry the heavy ampeg, I use a cool little Polytone amp.  I also play a very barebones Taylor mahogany acoustic guitar that I've fitted rather primitively with a soundhole pickup. This usually runs through a Carvin acoustic guitar amp or a PA system.

HC:  What insights/advice can you offer that you wish you'd known 25 years ago?

RP: People wishing to be musicians should cultivate and pursue their own musical vision without regard for market or convenience. In the end, all that matters is finding a voice and communicating something. I wasted a lot of time trying to be smart about achieving musical success. I should have just done what I liked.  Also, it seems like all that matters is persistence.

RP: A new CD sometime over the next year. Working with my son (Mookie) on his guitar playing. Trying to find enough time to play while working full time as an administrator at my charter school.

HC:  What's behind "Rich" to "Rick"?  Where you always Rick except for a brief period between the ages of 18-22 when you experimented with being Rich?

RP: I was really a Rick who was always a Rich at school. Not sure why. I became Rick full time when I moved back to NJ in 1985. I think the "masculinity" of "Rick" was little too much for me at one time, but I seem to have settled into it.