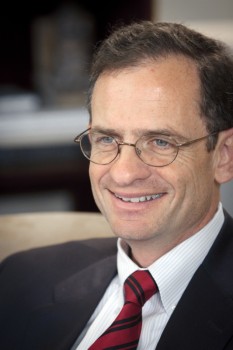 Published
Share
Dan Weiss, art history scholar and president of Lafayette, will become the 14th president of Haverford College. He will begin his duties at Haverford on July 1, 2013.

Dan Weiss, an innovative college administrator and respected leader in liberal arts education, will become the 14th president of Haverford College. Weiss emerged as the top choice in a national search that began last fall. An art history scholar, he has been president of Lafayette College in Easton, Pa., since 2005. He will begin his duties at Haverford on July 1, 2013.

â€œI can think of no better ambassador for the liberal arts than Dan,” said Catherine P. Koshland '72, chair of Haverford's Board of Managers.“At a time when higher education's value as a public good rather than a private benefit is being challenged, Dan can make the case for the public good. He can express the value of a liberal arts education and why Haverford provides that at the very highest level.”

â€œDan's deep knowledge of liberal arts education, his experience, scholarship, character and warmth, make him the perfect choice for Haverford,” said Howard Lutnick '83, who moves from Board vice chair to Board co-chair this summer.“The search committee was an extraordinary group, and Dan raised the level of discussion for everyone in the room. We felt energized just spending time with him.”

Weiss, a leading authority on the art of medieval Europe in the age of the Crusades, has led a number of key initiatives at Lafayette College since assuming the presidency. He headed a yearlong process to create a new strategic plan that was unanimously approved by the Lafayette trustees and faculty in the fall of 2007. In the first four years of the strategic plan's implementation, the College has increased the size of the permanent faculty by more than 10 percent, revised its Common Course of Study for the first time in 18 years, and developed interdisciplinary programs in Environmental Science; Health and Life Sciences; Film and Media; Theater; Women and Gender Studies; and Bioengineering. Other projects launched under Weiss' leadership include a major renovation project that will create a residence hall for global studies, and the development of a new center for global education.

â€œThere are many great colleges and universities in the U.S., but there is no place as distinctive as Haverford,” said Weiss.“Haverford has such a powerful culture and an approach to educating students in partnership with them that I think is unparalleled in American higher education. I am excited to have the opportunity to join a community like this.”

The appointment of Weiss follows an extensive national search conducted by the Presidential Search Committee that included student, faculty and staff representatives, as well as members of the Board of Managers and the Alumni Association. Also on the committee was a representative from Bryn Mawr College, with which Haverford has an extensive consortial relationship.  The search was managed by Storbeck/Pimentel & Associates.

â€œHaverford was looking for someone with proven leadership, a deep commitment to liberal arts, great personal warmth and wisdom, and an appreciation for our unique values and vision of higher education,” said Garry W. Jenkins '92, co-chair of the Presidential Search Committee.“In Dan Weiss we found all that we were seeking.”

â€œPresident-elect Weiss emerged from a diverse and extremely impressive candidate pool as our consensus choice,” said Jon Evans '77, search committee co-chair.“That is in large part because he understands that Haverford's Quaker-rooted values and practices are among the College's most valuable assets. Dan has both a professional and personal appreciation of Haverford's unique student-run academic and social Honor Code, which is at the core of our educational mission to nurture the growth of the whole person.”

â€œDan Weiss deeply understands the student experience at a liberal arts college, and his commitment to students and student involvement is truly in keeping with the Haverford tradition,” said Franklyn Cantor '12, who served with Gemma Donofrio '12 as a student representatives on the search committee.

Prior to assuming the presidency of Lafayette College, Weiss was the James B. Knapp Dean of the Zanvyl Krieger School of Arts and Sciences at Johns Hopkins University. As dean, Weiss oversaw all departments and operations related to the school's undergraduate and graduate programs.  Before he was named to that position in 2002, Weiss served as dean of the faculty at the Krieger School. Weiss earned both an M.A. and Ph.D. in art history at Johns Hopkins, where he started his career in academia, serving as a professor of art history from 1998 to 2001.

â€œHe believes that the best ideas come from the people around him,” said Falk.“So working with him is a very collaborative process. At the same time he is truly a leader. He has a wonderful ability to synthesize ideas into a direction for an institution and to insure that the institution gets where it needs to go.”

Kimberly Benston, interim provost at Haverford, calls Weiss“a leading voice in contemporary discussions of liberal arts education. He brings to Haverford superior achievements as a scholar-teacher and an outstanding record as a creative academic administrator who has enlarged and energized the institutions he has served.”

Weiss also has an M.B.A. from the Yale School of Management and worked from 1985 to 1989 as a consultant with Booz, Allen & Hamilton.  It was at Booz Hamilton, Weiss said, that he first got a sense of Haverford College.  â€œOne of the people I worked with was a Haverford graduate, and in a place full of bright people, he was one of the brightest,” said Weiss.“He would ask questions about a project that were different from the kinds of questions the rest of us were asking.” Weiss' boss at Booz Hamilton was another Haverford alumnus.“I found him to be extraordinarily humane, and he was very thoughtful in helping us work through difficulties.

â€œThose are the first two Haverfordians I ever met, and I admired them both and am pleased to say that I am in contact with them both still.”

In recent years, Weiss has emerged as a leader in higher education, eager to lead a national conversation  about the long-term prospects of liberal arts colleges in particular. In April, he hosted a three-day conference at Lafayette College called“The Future of the Liberal Arts College in America and Its Leadership Role in Education Around the World.” Co-sponsored by Swarthmore College, the conference attracted leaders from institutions across the nation.

Swarthmore College President Rebecca Chopp, Weiss's collaborator on the conference, agrees.“Dan Weiss is considered to be one of the most promising leaders regarding the future of liberal arts,” said Chopp.“He will be a superb president for Haverford and a wonderful leader within the Tri-Co community.”

â€œIn the short time we had to get to know him, Dan improved the way we think about higher education and its essential role within the context of a rapidly changing society,” said Board of Managers Vice Chair Christopher K. Norton '80.“If our goal is to train ethical minds to change the world for the better, we have found someone who examines and measures his own life by the same values and ideals we at Haverford hold so precious. We are excited by the prospect of learning from such a gifted teacher.”

President-elect Weiss arrives during the nucleus phase of Haverford's next comprehensive fundraising campaign, priorities for which will be refined under his leadership. He also arrives at a time when Haverford is increasingly at the forefront of higher education's move toward co-curricular expansion and consortial relationships. The College's three centers for interdisciplinary learning, centerpieces of the previous comprehensive campaign, facilitate research, scholarship and experiential opportunities that are grounded inâ€”rather than peripheral toâ€”students' core academic experiences. One of the country's few colleges or universities to encourage and expect all seniors to complete a thesis or similar capstone project, Haverford has empowered the centers to play an ever-increasing role in furthering student mastery of scholarly investigation:  83 of the 291 members of the class of 2011 engaged in center-affiliated work that directly informed their senior theses.

The College is also expanding its consortial relationships with Bryn Mawr and Swarthmore colleges, as well as the University of Pennsylvania, at which Haverford students may take courses. In addition to a new, jointly administered minor in Environmental Studies (with Bryn Mawr and Swarthmore), the College recently created a“4+1” program with Penn that enables Haverford students to get a bachelor's degree from Haverford in the customary four years plus a master's degree in engineering with just one additional year of study at Penn's School of Engineering.

â€œI think Haverford is exceptionally well-positioned,” said Weiss.“The strongest and best liberal arts colleges, I think, do a better job of training undergraduates than any other sector of the higher education system. And within that group, Haverford has a genuine distinction as a place that has a certain educational value system, and a commitment to shared responsibility, joint learning and service to the world.  To have an Honor Code of the sort that Haverford has, to have students engaged in the fabric of the place the way they are here is something every institution would aspire to, if it could be done as well as it is here. We have an obligation to tell that story, not only because it helps our own institution's visibility, but also because it helps the system of higher education in this country to advance a vision that is so powerfully effective.”