Haverford and the History of Photography 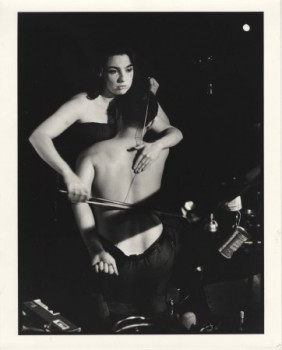 Marking the close of the exhibition“A Century of Haverford Alumni Photographers,” six distinguished art curators gathered at Haverford on Saturday to highlight the important contributions to photography made by five of the college's alumni.

The day-long symposium on September 20, organized by exhibition curator William Earle Williams, the Audrey A. and John L. Dusseau Professor in the Humanities, opened with a talk by Verna Posever Curtis, a curator of photography at the Library of Congress.  In addition to tracing the beginnings of photography, she revealed the prominent role Philadelphia played as a place where these developments took place. The salons in which new photographic work was displayed and critiqued, as well as the gradual ability of photography to function as a kind of social commentary, were an emphasis of her presentation.

Tom Beck, chief curator of Art at the University of Maryland, spoke of John Griscom Bullock, class of 1874, and his innovations in the field of photography. Beck emphasized Bullock's use of pictorial effect, a method which tries to simulate the stillness and delicacy of a painting.  However, Bullock was also experimental, according to Beck, and was open to the edgier techniques belonging to the avant-garde movement of his time.

Edward Cavell, former curator of photographs at the Whyte Museum in Banff, Albert, Canada, focused on the lives of the three Vaux siblings, George, class of 1884, William Jr., class of 1893, and their sister Mary. Traveling together, the trio photographed the  mammoth glaciers of the Canadian Alps, including the Yoho Valley in British Columbia.  Having hiked around the mountain passes of Canada in cold temperatures and at high altitudes in the early 1900s, the Vaux family showed an unwavering commitment to capturing the exquisite nature of these landscapes and sharing them with others.

Edwin Rosskam, class of 1924, was the subject of a presentation, delivered by Gary Saretzky, adjunct associate professor of arts and communication at Mercer County Community College.  With the help of his wife Louise, Rosskam wrote, edited and developed photographs for five books which focused on different segments of American life, including the lives of the urban and rural poor during the Great Depression and the experiences of Native Americans.  Figuring importantly in Rosskam's career was his collaboration with the famous author Richard Wright for a book titled 12 Million Black Voices.

A special moment in the symposium came when Haverford alumnus, Tom Garver '56 presented the work of schoolmate Peter Moore '55.  Garver, founding curator of the O. Winston Link Museum in Roanoke, Virginia, spoke of Moore's interest in avant-garde theater and experimental art movements of his time, such as Fluxus.  Garver also recalled Moore's personality, describing him as "thoughtful, open-minded and resolute."

Tom Hinson, a curator of photography at the Cleveland Museum of Art in Ohio, was the final panelist, presenting the work of alumnus Andrew Borowiec, class of 1979.  Hinson spoke of  Borowiec's tendency to depict the "uneasy coexistence of humans and their environment." A suburban backyard with a charcoal grill or simply the looming structure of a nuclear plant are some examples of Borowiec's photographs, which he has shot mostly in the Midwest and on the Gulf Coast.

That interest in exploring the relationship between humans and the environment was one of the common themes explored in nearly all of the work agreed the panelists during the open forum following their talks. Another commonality pointed out by Professor Williams, who moderated the discussion: Although all of the Haverford alumni featured in the exhibition were men, it was clear that the women in their lives, whether spouses or siblings, were invaluable to the production and dissemination of their photographs.