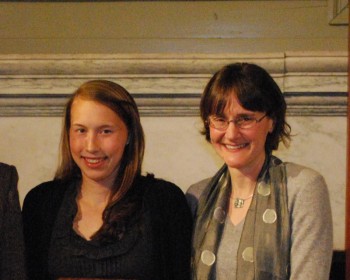 Published
Share
The recent graduate's thesis work led to co-authoring a paper with Professor Jenni Punt and outside collaborators.

When she arrived on campus in the fall of 2007, Harper Hubbeling '11 planned to study English at Haverford. But after Biology 200 and Professor Jenni Punt ignited her interest in science, the literature-lover ending up writing a different plot for her story.

Hubbeling has, however, become an author of sorts. She co-authored a paper,“The transcription factor NR4A1 (Nur77) controls bone marrow differentiation and the survival of Ly6Câˆ’monocytes,” for July's issue of Nature Immunology, a publication her advisor and co-author Punt calls“one of the best journals in immunology in the country, if not the world.”

The paper, which was written in collaboration with scientists from the La Jolla Institute for Allergy and Immunology and King's College London, includes work that Hubbeling did for her Senior Thesis, including research she did in Punt's lab as a Beckman Scholar, a program that funds 15 months of undergraduate research with extensive faculty mentoring.“It's always a â€˜we' in science,” says Punt, who notes that the paper's publication is a lovely illustration of the co-operation and collaboration of the international scientific community.

The discoveries announced by the paper include work based on a mouse that Punt and researchers in her T cell lab createdâ€”the first transgenic mouse at the College.“Its cells turn green when a certain gene is turned on, that's how we designed this mouse,” says Punt.“But Harper found a group of cells in the blood that were greenâ€”bright greenâ€”that were not T cells, they were not the cells we cared about, they were monocytes. And not only were they monocytes, they were a very specific kind of monocyte â€¦ [which] patrols, protects and does something to your blood vessels that keeps everything quiet, healthy and happy.”

This type of research is important because learning about the different roles of various parts of white blood cellsâ€”which protect humans from bacteria, pathogens, viruses and the likeâ€”and the connections between those parts, helps scientists to better understand immune system responses.

Hubbeling, for her part, just started another chapter of her story. She is currently working in an immunology lab at the University of Pennsylvania and is mulling over future M.D./PhD programs. Though she says she never thought she would have a published article to her name before she finished her undergraduate education, she credits the Haverford Biology Department with her success in that arena.“We have a massive amount of independence, and they trust us to use these machines on our own,” says Hubbeling.“At Penn the postdocs don't usually touch [the cell sorter]. But here they trust us. They ask us to be more responsible. But at the same time, if we want help, it is always there.”