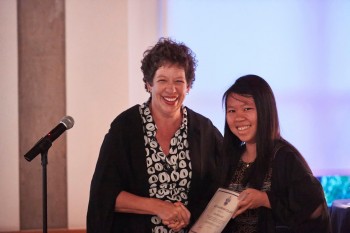 This is only the second time that the prize from Lucy Cavendish College has been given to a visiting student.

Gillian Miswardi '16 has been awarded the Annabelle Dixon Prize from Lucy Cavendish College at the University of Cambridge in the U.K. The prize, which commemorates the spirit of "generosity, collegiality, and intellectual curiosity" of its namesake, a former researcher at the school, is awarded each summer to students who have made the most of their time at the College. Miswardi has been studying abroad at Lucy Cavendish for the 2014/15 academic year.

"We were keen to acknowledge the significant progress Gillian had made on the Cambridge Social Anthropology course, as well as her success in essay competitions such as the Hart Prize for Human Rights and the Humber International Development Institute Essay Contest," says Dr. Emily Tomlinson, director of admissions at Lucy Cavendish.

This is only the second time that the Annabelle Dixon Prize has been awarded to a visiting student.