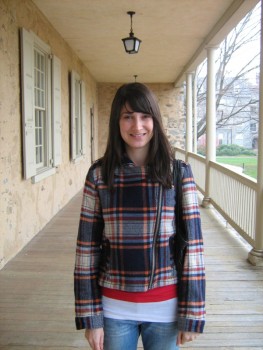 Lili Dworkin '11 is one of five Haverford students (and the only current one) to win an NSF Graduate Research Fellowship Program award this year.

Current senior Lili Dworkin is one of five Fords who were recently honored with National Science Foundation Graduate Research Fellowship Program (GRFP) awards. Starting in the next academic year (2011/12), these graduate students will each earn three years of support from the NSF, which includes a $30,000 annual stipend, a $10,500 cost-of-education allowance, and international research and professional development opportunities.

Computer science and math double-major Dworkin will use her fellowship to fund her computer science doctoral work at the University of Pennsylvania, where she will research a topic known as formal methods.“It's a cross-over between math and computer science,” says Dworkin.“The idea is that you use mathematical techniques to rigorously prove that hardware and software designs meet their specifications, so that they behave correctly.” It is an area of computer science that she became interested in during a summer research internship at the University of California, Berkeley, last year, and one that influenced her current senior thesis work. Dworkin is the first current Haverford senior in the computer science department to win this award.

Thomas Beck '10, who is pursuing a Ph.D. in immunology at Yale University, will use his award to continue his studies there. The former biology major spent the first year of his graduate education rotating through different labs that work in different aspects of immunology, and in June he will make a decision about which one to join to work towards his dissertation.“[The NSF graduate fellowship] gives me the freedom to join the lab that I'm interested in doing my dissertation research in without having to worry if the professor or principle investigator can fund me or not,” he says.

Connor Bischak '10 will head to the University of California, Berkeley, where he will use his GFRP award to begin work on a physical chemistry Ph.D., this fall. Bischak has spent the year since his Haverford graduation working in a physical chemistry lab in Germany with funding through the Fulbright program. But the Haverford chemistry major has been planning for graduate school since his junior year at the College.“My personal motivation for my research is my interest in understanding biological systems at the molecular level using biophysical techniques,” he says.“I became interested in biophysical chemistry by working in the group of Professor Casey Londergan at Haverford. His guidance at the research that I performed during my time at Haverford inspired me to pursue a Ph.D. in physical chemistry.”

Gili Freedman '09 applied for the fellowship in each of the past two years, and finally won this year, the last year she was eligible. Despite such persistence, the former psychology major wasn't just thrilled for her own win.“I think I was almost more excited by the fact that so many Haverford people got it than when I found out that I got it,” she says. Freedman has been in the social psychology doctoral program at the University of Texas at Austin for two years. The focus of her research, which this fellowship will now help fund, is the cause of social rejection.“What I'm hoping to do with my research is keep looking at social rejection, specifically in the context of a group,” she says.

Adam Subhas '09 has not made up his mind about where he will pursue his graduate studies, but he says that being a GFRP fellow will make his decision a little easier.“It's nice because it is completely independent of any institution, so I can bring this funding wherever I want to go,” he says.“And it offers some academic freedom wherever you go, because a professor doesn't have to put up their own funds for me to work with them.” The Haverford chemistry major is currently working as a lab technician in a geochemistry and chemical oceanography lab at the California Institute of Technology, and he plans to study earth sciences and oceanography (specifically the carbon cycle in the ocean) at whichever graduate institution he eventually chooses.

As if that wasn't enough good news, Samantha Wood (BMC '11) also earned a NSF graduate fellowship. Wood is majoring in computer science at Haverford and is currently a teaching assistant for Professor Steven Lindell. She will be attending the University of California, San Diego, where she will study concurrency in programming languages.

The National Science Foundation's Graduate Research Fellowship Program (GRFP) helps ensure the vitality of the human resource base of science and engineering in the United States and reinforces its diversity. The program recognizes and supports outstanding graduate students in NSF-supported science, technology, engineering and mathematics disciplines who are pursuing research-based master's and doctoral degrees at accredited American institutions.

Read about more Fords who have won fellowships, scholarships or grants.