The third year of the Institute was managed by the Center for Peace and Global Citizenship and included a Philadelphia-focused experience for students and recent graduates preparing to work in the city this summer and in the year ahead.

There is something uniquely Haverfordian about the Ethical Leadership Summer Institute (ELSI), from the interdisciplinary nature of the program to the way it fuels boundless exploration, close bonds with peers, and meaningful interactions with alumni.

When ELSI first launched in 2016, as a part of the President’s Office’s Initiative for Ethical Engagement and Leadership, it was organized and led by Visiting Professor of Economics and Independent College Programs Neal Grabell '77. This year, the Center for Peace and Global Citizenship took the helm and expanded upon the learning goals and opportunities available to participants.

Following last year’s expansion—which added a health-ethics track to the already-existing  business-ethics one—the 2018 Ethical Leadership Summer Institute changed its format slightly to focus on applied ethical action. One track was devoted to global health and a new track was designed for students embarking on summer internships or yearlong fellowships in Philadelphia, which aimed to introduce them to a new side of the city and its burgeoning nonprofit sector.

ELSI welcomed 11 Philadelphia-based CPGC-sponsored interns and six incoming Class of 2018 Haverford House Fellows for a weeklong exploration into all that Philadelphia has to offer.

"I was especially excited to focus on Philadelphia, which has a high concentration of alumni, a very rich and lively nonprofit sector, and diverse activist communities,” said Janice Lion, associate director of the CPGC who ran ELSI’s inaugural Philly track. “I think it’s important for all students to understand where Haverford is located and encourage them to tap into local networks, even if they’re only planning to spend 10 weeks working in Philadelphia over one summer.”

No two days of the Institute looked the same, with students travelling to neighborhoods throughout the city, eager to explore the narratives of activism and resistance that permeate one of the oldest cities in the nation.

"Rebecca Fisher ‘18 offered us a social-justice version of a Philadelphia history tour in Old City,” said Lion. “We were welcomed by community activists who lead the North Philadelphia Peace Park and the Friends of Mt. Moriah Cemetery in Southwest Philadelphia, and paddelled kayaks while learning about oil refineries that pepper the landscape along the Schuylkill River.”

According to Eric Hartman, executive director of the CPGC, the Institute’s goal this year was to equip participants with useful skills for their coming internships and fellowships.

"Through dialogue with alumni and sector-specific leaders, participants will have an expanded toolbox for working through ethical challenges they are likely to face during the months to come,” he said. “Connecting with the thinkers and doers who will be part of ELSI provides participants with systematic thinking about cross-cultural collaboration, structural issues, and sector-specific challenges.”

For the CPGC-sponsored interns and Haverford House Fellows who took part in the Ethical Leadership Summer Institute, the experience was invaluable.

"I’ve enjoyed seeing so many pockets of light and small actions that don’t necessarily dismantle huge structures of power, but that do make space for people and communities in small, important ways,” said Cole Sansom ‘19.

Hasibe Caballero-Gomez ‘21 was struck by the level of engagement with the city available to her through the Ethical Leadership Summer Institute.

"In the year that I’ve spent at Haverford I didn’t get to know Philly as much as I did in the last five days,” she said. “Not only were we seeing all different parts of Philly, but we were also connecting with people who have come to and been in Philly in all sorts of different ways. Now I’m really excited to learn even more about it.”

Though the Ethical Leadership Summer Institute has wrapped up and the participants are off to explore their individual internships in a wide variety of fields—the CPGC is sponsoring the work of 64 Bi-College summer interns around the world, 14 of whom will be Philly-based— the lessons learned and skills acquired through ELSI live on in these students. By focusing on the ethical dimensions of their work, they are attuned to the unintended consequences and tradeoffs of their decisions and actions.

"Many times this week I was weighing which way is the best way to make change,” said Olivia Wong ‘21, “but I realized that no matter what field you’re in you can make change. Because social justice matters in all parts of life.” 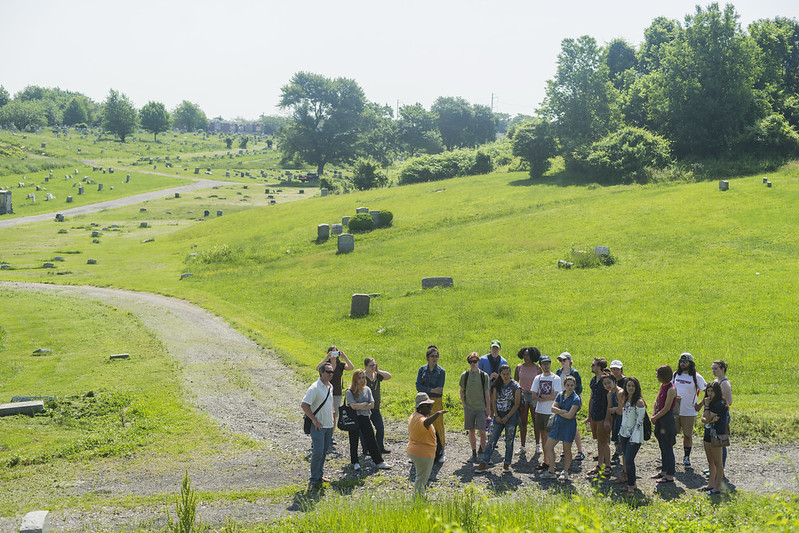