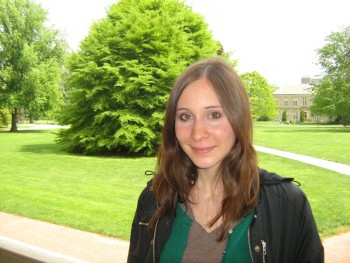 Starace, who studied abroad in Berlin last spring, is returning to Germany to teach English next year.

Emily Starace '13 has been awarded a Fulbright English Teaching Assistantship (ETA) to spend nine months in Germany teaching English, starting in September. The German and linguistics major studied abroad in Berlin in spring 2012 and wrote a thesis about immigrants in Germany and how they attempt to find their place in German literature and culture, so she is eager to return.

"I applied to the Fulbright ETA primarily as a way to return to Germany to solidify my German language ability and continue the passions I explored in my thesis, but also because I might be interested in teaching,” says Starace, who, in her time at Haverford, has sung with the Chamber Singers and the Bi-Co Chorale and co-lead the Books Through Bars 8th Dimension service project. "I view this experience as a way to help me narrow down my interest and understand more clearly what path I want to go career-wise."

The Fulbright English Teaching Assistantship places Americans in classrooms abroad to provide assistance to teachers of English to non-native English-speakers. These ETAs help teach the English language while serving as cultural ambassadors for the U.S. Starace was one of 140 people chosen for an ETA in Germany.

The Fulbright will fund travel to and from Germany, health benefits and a monthly stipend for living expenses. Starace doesn't yet know where in Germany she'll be teaching, though her top three choices are North-Rhine Westfalia, Berlin and Hamburg. Before classes start, she will attend the Fulbright's orientation program in Cologne, and during that time she will receive her school placement.

Because her classroom commitment amounts to only 12 hours a week, Starace hopes to also volunteer with an immigrant services or advocacy group and take Turkish language lessons. (Turks are the largest immigrant group in Germany.)

Despite all the time she has spent studying the language and culture of Germany while here at Haverford, it was not what Starace intended to study in college. In fact, before registering for classes her freshman year, Starace, who studied Spanish in high school, had never set foot in a German classroom before.

"It's still surprising to me sometimes that I've ended up being a German major, but it's provided one of the most rewarding and enjoyable experiences I've had at Haverford and now is helping me find my footing in the real world," she says."I am so grateful to the German department, and my freshman advisor [Associate Professor of English Christina Zwarg] who persuaded me to give 'Elementary German' a try."