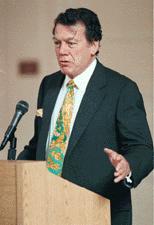 How can Jewish students help each other celebrate their religious heritage?

This question was the focus of an October visit to Haverford by Edgar Bronfman, chairman of The Foundation For Jewish Campus Life (Hillel) and The Seagrams Co. Ltd., and Richard Joel, President of Hillel. The visit was part of an ongoing effort by the two men to visit Jewish students in colleges and universities around the country and inspire them to participate in what they described as a 'Jewish Renaissance'.

While at Haverford, Bronfman and Joel met privately with Jewish student leaders and held a public forum in Founders Great Hall where they talked to more than 75 Haverford, Bryn Mawr and Swarthmore students about their experiences with Judaism and the founding of Hillel chapters in the US and Russia. Bronfman also talked about his work with Swiss banks and European governments to restore Jewish property seized by Nazis and Communists across Europe.

Observing what he described as a dramatic increase in participation in Jewish student life, Joel noted that," many graduates leave college with an advanced degree, but feel like they only have a second grade knowledge of Jewish culture. But what we have found over and over is that the number of students who are trying to learn more about Judaism and 'do Jewish' on campus has been growing very quickly.

"In many colleges today," Joel continued,"Jewish students are united in a way that the rest of the Jewish community is not. Our thought has always been that you are a microcosm of the rest of the world and that if Jews are to get along with each other, you can start that process in your school. You are building a Jewish renaissance that people are beginning to notice."

Third-year student David Sayres, who heard Joel speak at the Schusterman Hillel International Student Leaders Assembly, a week long summer program for Jewish student leaders, said he believed Bronfman and Joel's visit to Haverford was, in part, a recognition of the growth of the joint Hillel program at Haverford and neighboring Bryn Mawr College. "During my freshman year," says Sayres," we really only saw the same 10 to 15 people participate in services. Now, it is not uncommon to have 35 or 40 people at some Hillel activities."

According to Cheryl Cook, associate director of the Haverford-Bryn Mawr Hillel, Bronfman and Joel's visit was one of their first to a small, liberal arts college. "They came first to energize students and also to listen to them. They recognize that schools like Haverford are different from universities," she said. "At bigger institutions, often the focus is to create a community of Jewish people. Here there is already a larger community and what we are trying to do is help people feel comfortable and be 'Jewish' in that community."

Edgar Bronfman's visit to campus was also featured in The Philadelphia Inquirer. Click here to read the story.