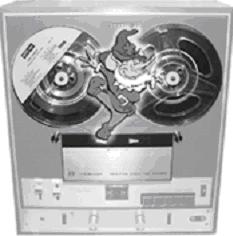 In 2000, two documentary filmmakers walked through the doors of Special Collections with funding to create the life story of the eminent twentieth-century Quaker philosopher, Rufus Jones. They were interested in recordings, films, and photographs from our vast Jones collection, as well as some held by Roger Hill, director of audio-visual services. The filmmakers' project came to a successful close with the making of Rufus Jones: a luminous life, but not before it brought a disturbing problem into focus. Many of the audio recordings we held were on formats for which the Library no longer had playback hardware. Moreover, many of the recordings that were on playable media were of a very poor quality. As a result, the Library decided to remedy the situation during Summer 2003, not only for the Rufus Jones collection, but for all audio recordings in the possession of Special Collections by converting audio recordings into digital objects.

Recordings varied in kind, condition and identification. Many did not include such information as the recording speed or extent of the program. Some recordings were clearly second or third generation copies, amalgamated from several master tapes or vinyl discs. Some warbled and yawed like a leprechaun had been dancing on the recorder's capstan.

These sorts of revelations kept the work exciting and the progress halting. A first step was simply to get a clean playback from each reel. Most had been boxed for years, and we worried that some tapes might begin to disintegrate under the playback heads of a reel-to-reel player. Referred to as“sticky-shed syndrome,” this disintegration occurs when the glue that fixes the magnetized oxide to the acetate or polyester backing has absorbed enough moisture to become gummy and weak. Sticky tape wreaks havoc with playback machines. Although properly stored audio recordings created as far back as the 1940s can be reproduced with remarkable fidelity today, progressively more tapes are ruined by age, and few machines remain to play them.

One digital option is recordable compact discs (CD-R). One CD-R can hold approximately 800 megabytes, roughly equal to 80 minutes of stereo audio. CD-R requires essentially no ongoing maintenance. Further, high-quality CD-R brands, such as Mitsui Gold, are reliable for 100 years, and possess the additional advantage of being immediately reproducible by any conventional CD player. We produced two copies of each program: one on Mitsui Gold CD-R and one on conventional CD-R. The Mitsui Gold copies were sent immediately to a climate-controlled space in the Library, while the commercial media remain available for public use. In some cases, a third copy was created as well, digitally processed to reduce hiss and background noise from especially damaged originals.

All of this was accomplished at moderate cost to the Library -- the salary of one full time student employee for a summer, with some additional time support from student and professional staff at Magill Library. WHRC, Haverford's student-run radio station, provided the equipment, and the transfers were conducted onsite using a Dell PC, Echo Mia sound card, and Sound Forge 6 software. Both the Library and WHRC hope this working relationship will be ongoing.

It is tremendously satisfying to have reformatted and preserved such recordings as Rufus Jones' speech in North Carolina in 1942, Howard Brinton's religion lectures, and lectures by Henry Cadbury, as well as the entire set of oral history tapes made within the last decade. A public CD library provides a tremendous service to researchers and the Haverford community. In the future, patrons from around the world will be able to listen to these audio recordings over the Internet. We encourage those who would like to know more about these efforts to contact the authors.

-Chris Kingsley is a member of Haverford's class of 2005